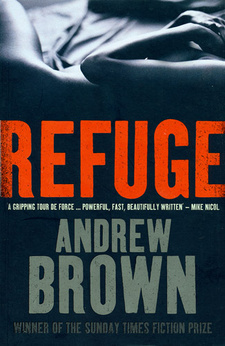 Andrew Brown‘s latest novel Refuge is a fast-paced story filled with lawyers, policemen and the dubious personalities that inhabit the underbelly of society.

"Hello, my name is Abayomi. Please come inside". With this simple beginning, his world changes for ever. The sound of her voice, so close, makes it irredeemable. As with all deflowering, something fundamental is lost and something sage acquired. He cannot see her yet. She stands in the shadow of the doorway, shielded by the glare of sunlight off the white walls. His eyes smart as he tries to make out her form. But just hearing her address him, he knows he has embarked on a course definitively contrasting to the one he has followed up until now. The sultry lilt, the suggestion of foreignness in her accent, the undertow of eroticism, all combine in an instant to unbalance him. It brings with it a freshness that unseats him and lifts his staidness. Even if he walked away now, he would have something pure and poignant to recall. He could sit alone, surrounded by bustle and noise, and call on this memory. He could pocket it like a stone and rub his thumb across its smooth form. He could store it in a velvet-lined box and take it out in privacy. The steps that brought him to this door were small. Simple decisions made, perhaps impulsively, each without moment, but each directing him towards this culmination, this initiation. The true consequence of these half-conscious acts lies in the doorway, now open, and in the dusky interior beyond. It beckons but is ultimately treacherous. Perhaps his momentum could still be stopped, if he wished. He could retreat, apologise and leave. Or take one more step and enter. A step back, the door will close again and he will have only the glimpsed memory of another world. A step forward, the door will shut behind him and he will enter the whirlwind unleashed and be pushed along its tumultuous path of death and rebirth. Once inside, the street outside is gone for ever; he cannot pass through the same doorway again.

He is described by those around him as dependable, as having integrity - he suspects that these are other words for uninteresting. In their eyes, he knows he always looks the same, mundane and featureless. But they do not know how close he feels to losing control. He fantasises about letting go, just releasing his emotions into open space - like a swimmer suspended in the turquoise light of a deep bay, his arms and legs splayed open, far from the shore. He dreamt once that he was an astronaut, treading with heavy boots on top of his spacecraft. Looking up at the spray of distant stars, utterly quiet, he bent his knees and pushed out, his body drifting away from his ship into unbounded space. When he awoke, he had felt crushed with the weight of sadness.

His life has been an accumulation of regrets - chances that were offered and not taken, moments of opportunity that he was too afraid to grasp. He looks back in mourning. And yet the thought of abandoning his trodden path fills him with panic. He is like a tiler who sees that his pattern has run skew, but who knows that he is unable to go back and correct it, and so doggedly continues, increasingly straying from his chosen line with every tile he lays. His whole adult life, he has been moving down an island of expectation between lanes of traffic. Some days he plods forward like a blinkered carthorse. Other days he moves like a wounded man, stumbling along his narrow strip, with surging trucks passing on either side. No one can see him bleeding; to them he is walking deliberately, not staggering and thrashing. (...)

This is an excerpt from the crime novel: Refuge, by Andrew Brown.