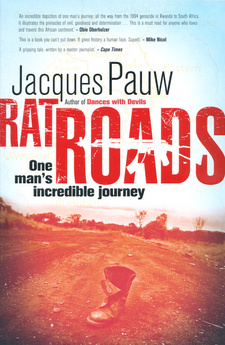 In his book, Rat Roads, Jacques Pauw combines many strands of life in Africa. Besides being the chronicle of one man’s incredible journey, it addresses issues such as civil conflict, xenophobia and the plight of refugees. It also explores the nature of war crimes and guilt, and gives insight into present-day Rwanda, showing how one tyranny has replaced another.

The day starts like any other, with Kennedy Gihana rising before the crack of dawn. He wraps himself in his cloth, grabs his stick and darts off to milk the cows. He then walks a kilometre down into the valley to fetch water. On his return, he gulps down a chunk of cassava with milk and washes himself. When Grandma is satisfied that her boy is squeaky clean, she gives him a white shirt and shorts to put on. Kennedy has waited until his eleventh birthday to wear, as he puts it, 'proper clothes' for the first time. And it is only because this day is special. Today he is going to school. Grandpa has told him he can only attend school two days a week. The other three days he has to look after the cows. Shortly after six, Kennedy sets off barefoot and runs the seven kilometres to school. Across the waves of mounts, cavities and rivulets, people resemble ants as they engage in their daily chores. The boy is like a hare, meandering the well-worn panya roads - a Swahili word meaning 'rat roads' - past clean-swept villages, through banana groves and up grassy slopes before he bursts from the eucalyptus woodlands and scampers into the grounds of Bigada Primary School in Kabonela, Uganda. Before long, he will acquire the nickname 'Braintank'.

Among the troops slogging through the mud and mire is Corporal Gihana, gangly and lean-bodied with gaunt features. In his hands he clutches a light machine gun, and bands of bullets are flung around his neck. Villages have been emptied by the killers or abandoned by their terror-stricken inhabitants. Even the fields and hills, exploding this time of year with colourful eruptions of daisies and amaryllis, are lying fallow. The rebel troop reaches Kabuye, a suburb on the outskirts ot Kigali, Rwanda. Kennedy and his compatriots slog up a hill and move from house to house, rummaging the area for the interahamwe with their bloodied machetes. He enters a compound and swings his gun from one side to the other, his finger curled around the trigger. In the backyard is a longish stick with a sharpened point with seven bodies skewered like a brochette — a kebab. The father is on the one end; the mother on the other. Speared between them are their children, the youngest a tot of a few months. He's spiked next to his mother, the eldest next to her father. Kennedy stares rapt and abhorred, incensed and irate at the malevolence and madness engulfing the tiny east African country in the autumn of 1994. When he emerges from the compound, his callous eyes scour the village, his finger taut around the trigger and his heart filled with hatred and a lust for blood. (...)

This is an excerpt from the book: Rat Roads: One man's incredible journey, by Jacques Pauw.

If you only read one book about Rwanda and its infamous genocide, make it Jacques Pauw's Rat Roads!