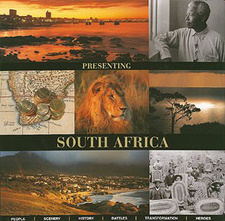 Presenting South Africa by Peter Joyce is divided into an informative introduction and nine beautifully illustrated chapters, each devoted to one of South Africa's provinces.

Not long after Pretoria's founding in 1854 as a kerkplaas, or 'church place', focal point for nagmaals (Calvinist-type communions), baptisms and weddings, it became known as the City of Roses: the climate encouraged luxuriant growth, and in the very early days 'every garden hedge, stoep and even water-furrow' was garlanded by enchanting ramblers. Later came the jacarandas, the first imported at £10 a piece from Rio de Janeiro in 1888. Today 70,000 and more of these exquisite, lilac-blossomed trees grace the parks, gardens and about 700 kilometres (440 miles) of streets. Pretoria is largely an administrative city, home to the political elite and their bureaucrats. But it is also an important communications centre and its advanced industrial complex, based on the huge (though now ailing) Iscor steelworks just outside the city, includes engineering, manufacturing and diamond mining. Just to the east is Cullinan, named after Sir Thomas Cullinan who, in 1905, discovered a fabulously rich kimberlite pipe in the area and developed the Premier Mine, still among the world's foremost diamond workings. In the same year it yielded the famed Cullinan diamond, at 3,016 carats the largest ever unearthed anywhere. Pretoria, spread out beneath the heights of Meintjieskop, its eastern extremity touching the pleasant foothills of the Magaliesberg, features prominently in the history of Afrikanerdom. This was Paul Kruger's stamping ground, home base to the iron-willed patriarch from 1883 until, with Lord Roberts's columns relentlessly advancing from the south, the old man was forced to flee to Europe and into exile in May 1900. His house still stands, at the western end of Church Street, a surprisingly modest single-storeyed building with a wide verandah on which he held open court, greeting passers-by, receiving his people in informal fashion until the guns of the British drove him away. It now serves as a museum. The city's hub is Church Square, at the intersection of Paul Kruger and Church streets, an area originally known as Market Square. Here the first place of worship was built, the first open market held and the first shop opened for business. And it could, if the residents had had their way, have become one of the glories of the subcontinent. In the early 1900s many voices were raised in urging the city fathers to create a gracious, spacious piazza of fountains and flowers and Italianate paving, but deaf ears were turned to the pleas and, in 1910, the square was redesigned as a tramway terminus. Still, it has its assets, notably the Old Raadsaal, or republican parliament, completed in 1889 in French Renaissance style with a sprinkling of classical features, and the South African Reserve Bank, designed by the celebrated Herbert Baker. Pretoria's two most striking architectural legacies, though, come from very different eras, created by people whose dreams for the future were very much at odds with each other - and with those of posterity. Rising grandly from the summit of Meintjieskop is the magnificent, crescent-shaped Union Building, also the work of Baker and now the administrative headquarters of the national government. It was completed in 1913 to celebrate the coming together of English- and Afrikaans-speaking whites. (...)

This is an excerpt from the book: Presenting South Africa, by Peter Joyce.