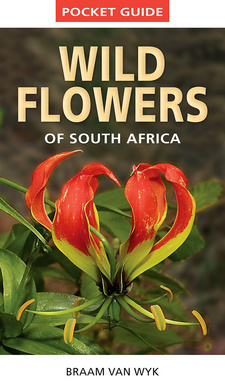 The principal objective of Braam van Wyk's Pocket Guide: Wild Flowers of South Africa is to give the reader a glimpse of the region's floral riches.

For a country of its size South Africa's floristic and vegetational diversity is without equal in the world; over 22,000 plant species are native to the region. Many South African plants are strikingly beautiful, and several garden ornamentals that have become universally popular are derived from species native to the region. Common and conspicuous plant species that are likely to be seen, especially along the roadside, have been featured in this book. The species presented represent all the major vegetation types and include several weedy alien species that are naturalised in the region. Though this book covers many flowering plant species, inhabiting a range of vegetation types, it describes only a fraction of the species found in South Africa. South Africa has two distinct floristic kingdoms and is one of only a few countries in the world where one can drive overland from one kingdom to another; it certainly is the one where the change in species composition is most noticeable and the transition between two kingdoms most striking. South Africa is also the only country in the world to harbour an entire floristic kingdom, namely, the Cape Floristic Kingdom. The smallest kingdom by far, the Cape Floristic Kingdom has more than 8,000 plant species, at least 70% of which are strictly confined to the region. Groups that contribute extensively to the floristic diversity of the Cape are the ericas (730 species) and especially the families Proteaceae (proteas), Restionaceae (reeds), Iridaceae (irises), Asteraceae (daisies), Rutaceae (buchus), Fabaceae (legumes) and Mesembryanthemaceae (vygies). No fewer than eight plant families are more or less strictly confined to the Cape. Outside the Cape, the flora of South Africa has a very different composition and is classified as part of the Palaeotropical Kingdom, a large floristic region that includes most of Africa, Madagascar, India, Malaysia and Indonesia. Prominent groups within this region are from families such as Poaceae (grasses), Mimosaceae (acacia family), Combretaceae (bush willow family), Convolvulaceae (morning glory family), Acanthaceae (acanthus family), Malvaceae (hibiscus family) and many others, mostly with a tropical affinity.

Vegetation can be described as the general effect produced by the growth forms of some or all the plant species in combination. World-wide the principal vegetation types are forest, savanna, thicket, grassland, semidesert, desert and fynbos (sclerophyllous shrubland). Development of these broad groupings, which represent different habitats, is determined by prevailing climatic conditions over large areas. It is mainly the structural features of a vegetation type that determine its associated macrofauna (e.g. birds, mammals). Areas relatively uniformly covered by any one of these broad vegetation types usually represent major biotic zones called biomes. Although biomes are not determined floristically, they do contain characteristic plant species adapted to the specific prevailing habitat conditions. South Africa has seven biomes (see map), which are briefly described below. By also considering floristic differences, the biomes are further divided into about 400 different vegetation types.

Dominated by woody vegetation, a forest is multilayered with a continuous canopy cover. South Africa is very poorly endowed with forest; it is by far the smallest biome, covering less than 0.25% of the region. Forests usually occur as small isolated patches (rarely larger than 1 km2) in relatively frost-free areas with a mean annual rainfall of usually more than 725mm. South Africa's forest can be broadly divided into three main types: Afromontane, Coastal and Sand Forest. [...]

This is an excerpt from the Pocket Guide: Wild Flowers of South Africa, by Braam van Wyk.