Paths to Pubs: A Guide to Hikes and Pints in the Cape Peninsula, by Tony Burton 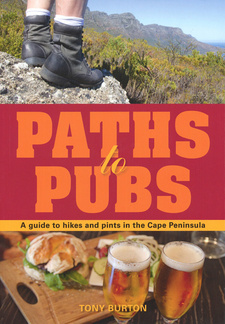 Paths to Pubs: A Guide to Hikes and Pints in the Cape Peninsula, written by veteran hiker Tony Burton, is a must-have for novice and experienced walkers, whether tipplers or teetotallers.

How to use this guide

The walks, hikes and trails are sorted into these areas, and given corresponding alphanumeric names. Paths A1-A9 are in the Cape of Good Hope section of Table Mountain National Park; paths B1-B11 are in Simon's Town, Scarborough, Kommetjie and Fish Hoek; paths CI-CI6 are in the Silvermine section of Table Mountain National Park and Kalk Bay; paths D1-D14 are in Hout Bay and Constantia; and paths E1-E19 are on Table Mountain. Each path is defined and graded in an up-front summary, which Includes warnings and GPS co-ordinates, so that hikers can easily see if it suits their needs. After this a comprehensive description follows, outlining the route in detail. Where relevant, booking and permit Information Is cited; make sure bookings have been made, or that you have enough cash on you to enter a reserve. Note that distances may be approximate. Each path is also graphically represented on a map, which has a corresponding alphanumeric name. In some cases, where there Is sufficient overlap, paths share a map. In these Instances, keys are provided to show you which path is which. As well as showing the route, the maps highlight ascents and descents, landmarks, point of Interest and potentially dangerous areas. True north Is shown. Overview maps are also provided with each section (A-E). These show the full area that each section covers. Unmarked with paths, their purpose is to show the general terrain, features and points of Interest that are covered in each section. When used In conjunction with the path-specific maps, they help to orientate hikers. Similarly, a Cape Peninsula map Is provided here in the Introduction, which will give you yet a larger overview of the full area covered. The boxes show exactly which part of the Cape Peninsula Is covered in each section (A-E). While various maps were consulted In compiling these maps, two topographical maps were used as the base maps in this book, namely Cape Peninsula North 1 in 50 000 and Cape Peninsula South 1 in 50 000. They have been published with the kind permission of the Chief Directorate: National Geo-Spatla Information Department (NGI) (previously the Chief Directorate: Surveys and Mapping), Department of Rura Development and hand Reform, In Cape Town. Due to the large scale of these base maps, some details will not be visible, so you may wish to consult other maps to complement them. Peter Slingsby's maps of the Cape Peninsula are highly recommended. You will also note various other paths are marked on the maps, which may not form part of the path we are describing (our paths are clearly differentiated). [...]

This is an excerpt from the book: Paths to Pubs: A Guide to Hikes and Pints in the Cape Peninsula, by Tony Burton.

Paths to Pubs: A Guide to Hikes and Pints in the Cape Peninsula

Paths to Pubs: A Guide to Hikes and Pints in the Cape Peninsula describes 69 tracks that traverse Table Mountain, the headlands of Cape Point, and the ridges, beaches, forests and coastal villages.