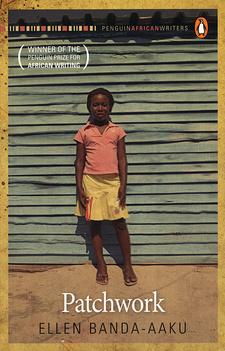 Ellen Mulenga Banda-Aaaku, author of Patchwork, is a Zambian born in the United Kingdom who has lived, studied and worked in Ghana, South Africa, the UK and Zambia.

I'm two different people according to the Registrar of Births. My birth was registered twice. Both records state Mother's Name as Totela Ponga aged eighteen, my date of birth as August 16, 1969 and my birth weight as an eye-popping ten pounds seven ounces. That's where the similarities end however. On the birth certificate my Grandma Ponga obtained from the Registrar of Births Unknown has been entered against Father's Name, and my name is stated as Natasha Ponga. My other birth certificate, delivered in a sealed envelope to my tata two nights after I was born, has Father's Name entered as Joseph Sakavungo and my name as Pezo Sakavungo. From my razor-sharp eavesdropping skills, I know that when Grandma Ponga found out that Tata had bought a second birth certificate, she grabbed her late husband's mututila and chartered a Zamcab to Tata's office in town. She couldn't use the mututila because the gunpowder was caked solid and she had no idea how to load it. So, Grandma Ponga says, T used my hands. I grabbed his ujeni in my fist and twisted it like I was closing a tap. Tight. To stop it leaking bad seed all over the place.' But for all the ujeni- squeezing, name-calling and threats that bounced between Tata and Grandma Ponga over whom I belonged to and what my rightful name was, I'm known neither as Pezo nor Natasha. Everyone calls me Pumpkin. Firstly, because I was a fat, chubby-cheeked baby. And, secondly, because when Ma was pregnant with me, no matter how much pumpkin she ate, she just couldn't get enough. That I adopted Tata's surname didn't stop Grandma Ponga triumphantly telling the story of what she did to him that day -though as I grew old enough to understand she would always lower her voice or look around to make sure that I wasn't about before she began. But with all her wisdom, she made a mistake; she misjudged my level of intuition. For, from the very first time I heard Grandma Ponga tell the story, with me strapped to her with a chitenge - my cheek squashed against her sticky, pulsating back - I knew. Even though I was too young to understand, I knew. I knew that / was bad seed. Yesterday Tata bought Ma a car: a bright red Fiat 127, registration number AAC 1951. Nineteen fifty-one, that's the year she was born. This morning our new car won't start. 'Come on!' Ma slaps the steering wheel and her silver bangles, which are the same size as her hoop earrings, clatter and jingle. Mwanza, the houseboy from flat four, which is next to ours, is on the veranda with his toothbrush sticking out of the side of his mouth like a cigar. He's debating with the caretaker, a skinny man with a small, shaven head who wears big spectacles that make him look like a grasshopper. The two are always debating and today it's about the odds of an African country winning the football World Cup. When they notice our car isn't starting they come over and peer under the bonnet. Problem is the battery, Madam!' Mwanza says. 'Not battery. Starter,' the caretaker says, offering his opinion and then starting to explain why it can't be the battery. 'Okay, whether battery or starter, let's push Madam so she's not late for work.' Mwanza closes the bonnet and shoves his toothbrush in the pocket of his brown corduroys. 'Madam, neutral gear.' Mwanza's built like a wrestler because he's always eating and he lifts bricks to build his muscles. When he bends over and pushes the car it rolls into motion even before the caretaker joins him. [...]

This is an excerpt from the book 'Patchwork', by Ellen Mulenga Banda-Aaaku.

The novel 'Patchwork' was the winner of the Penguin Prize for African Writing in 2010.