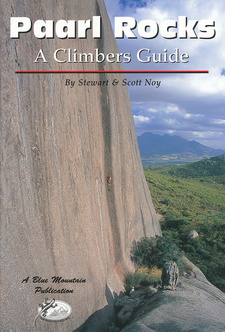 The brothers and rock climbers Stewart Noy and Scott Noy wrote this definitive guide to climbing at Paarl Rocks with trad and bolted routes at all levels.

There's something about Paarl that makes it different from the rest of the Western Cape climbing areas. It has something to do with the feeling of space that you get with long views of the dusty brown of the Swartland flatlands on one side and the green valleys from Stellenbosch to Wellington on the other. It has elements of a familiar kind of getaway from the busy urban confines of peninsula climbing and yet it still has an urbanity that's closer to home than the country routes beyond the mountains. I think what makes Paarl Rocks different is a sense of solitude that lurks up there around the rounded grey domes and boulders. Anyone going beyond the car park or the tops of the rocks will find a unique kind of peacefulness there in the trees and fynbos below the steep side. You feel far away but at the same time there is a mellowness to the place. It's almost like being on holiday for the day. Some climbers do consider a days cragging at Paarl to be a rest day: a day of feet and fingertips instead of power. But step off the ground up the steep featureless slabs and the flat, technical walls a whisker off vertical, and the psychology of climbing there becomes anything but restful. The climbing is an intense head game and that in itself makes it unique and very different from our typical sandstone routes. Our era at Paarl came right at the cusp of the change from trad to sport climbing. We stepped in just as the last of the cracks and grooves were ready to be climbed, largely following lines that had at least some natural protection, and the short, hand-drilled bolts that we laboriously pounded in have mostly been replaced with long and secure power drilled anchors. This is a good thing, and there are great routes of all grades for all climbers now. But there is still a lot more scope for new lines, especially new Parklife like routes up the big walls on the steep side. The crag has a lot of exciting potential yet, and has not nearly reached full development. Tony Lourens and the Noy brothers together have succeeded admirably in compiling this accurate and definitive guide to the climbing at Paarl. Hopefully this will encourage more climbers to enjoy the uniqueness of this special area; a crag embraced with a solitude, a calmness and an ambiance that is hard to define exactly until you go there and feel It yourself. And there is a small admission I have to make well after the fact: Part of the reason for Paarl's fearsome reputation for blank friction slabs and epic runouts stemmed from Ed Feb's nasty tumble down Sunset Warrior. Times have changed significantly since then, even though Ed's ankle still hurts years later. It was a stupid idea to do one more pitch: the sun was setting and our hand drill-bit was blunt, but we were keen back then. I was lighting a cigarette when he slipped off. Both hands were off the rope, not that it would have made much difference with 20 meters of slack to reel in. I dropped both the cigarette and the lighter and managed to take in maybe 2 meters of rope before the flimsy bolt caught him. I don't think attentive belaying would have made any difference to the outcome, but the essence is that the person leading is most probably in a vastly different place of quiet desperation to the person belaying. Keep your attention and your hands on the rope, climb carefully, and have fun because that's what it is all about. I hope you enjoy Paarl Rocks as much as I have enjoyed climbing there. [...]

This is an excerpt from the climbing guide: Paarl Rock Guides, by Stewart Noy and Scott Noy.

This is a complete climber's guide to Paarl Rocks in the Western Cape of South Africa.