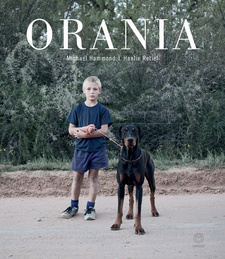 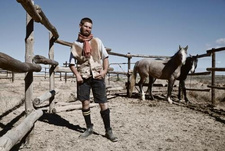 Out of the Afrikanervolkstaat: An excerpt from Orania by photographer Michael Hammond and author Hanlie Retief.

In 1990 Professor Carel Boshoff, son-in-law of former South African prime minister Hendrik Verwoerd, bought the town of Orania on behalf of a group of Afrikaner families from the Department of Water Affairs for an amount of 1.5 million Rand. Shortly afterwards an adjoining farm was bought. Since then the town and farmland have slowly been expanding. The original settlement consisting mostly of prefabricated timber homes was established in 1963 to provide housing for the work force constructing channels leading from the Vanderkloof dam. When construction work was completed, the homes and infrastructure fell into disrepair. The relatively low property values gave Boshoff and his supporters an opportunity to acquire the settlement from a successful tender. Their initial ideal was to establish similar projects in other parts of the Northern Cape, thereby expanding the borders ol their anticipated independent volkstaat. Understandably, the town was cloaked in controversy from the very beginning. In 1995, South Africa's newly elected president. Nelson Mandela, in a conciliatory gesture, visited Orania and had tea with Hendrik Verwoerd's widow, Belsie. Verwoerd was of course, the architect of Grand Apartheid, an attempt to dispossess black South Africans politically of their citizenship and make them residents of pseudo-independent homelands. The visit to Orania by Mandela as head of state of a post-apartheid government highlighted the historic irony of a situation that found the Afrikaner residents of Orania applying the homeland model to themselves in an attempt at self-determination. Since then, prominent people such as Jacob Zuma and Julius Malema have also visited Orania, attracting reporters from far and wide. Though the idea of a volkstaat for Afrikaners is a political ideal, the property is controlled by a private company, the Vluytjeskraal Aandeleblok (share block). Residents who own property in the town are shareholders in the company. There exists a tension between the shareholders and those who are mere employees or tenants. Singles quarters were recently completed to house young, unemployed men who come to Orania in search of work. During a visit lo Orania a few years ago, I was surprised by the forthright way in which the town council's publicity material referred to "the labour problem". The problem arises from the fact that only Afrikaners may be employed as workers, yet many Afrikaners are unwilling to do manual labour, or expect to be paid substantially more than the standard wage for which coloured or black workers in the vicinity work. In conversation, some residents expressed concern about the increase in unemployment and poverty among Afrikaners in other parts of the country, which has resulted in an influx of destitute people coming to Orania in search of a better future. These new residents put additional pressure on the economy of the town. Orania is not a state with a large source of revenue or a substantial number of tax payers, after all: it is a private company. Nevertheless, Orania has its own flag, currency (the Ora), radio station and public holidays. Despite the fact that the South African government seems to acknowledge the existence of the town as a space where the volkstaat ideal may be pursued, in 2005 a land claim was lodged by a group of coloured Northern Cape residents, and the towns radio station was shut down owing to racist opinions voiced on air. The land claim was settled in 2006, however, and the radio station reopened in 2008.  [...]

This is an excerpt from the urban portrait: Orania, by Michael Hammond and Hanlie Retief.

This illustrated book is a photographic account on and urban portrait of Orania, a culturally homogeneous place of Afrikaner lifestyle in midst of South Africa.

Byleveld: Dossier of a Serial Sleuth

Byleveld: Dossier of a Serial Sleuth focusses on Piet's years as a South African detective and the disturbing cases he has been involved in.

Cape Town then and now

Cape Town Then and Now is a unique visual portrait of Cape Town and the Cape Peninsula.

This is a full account on the Griekwastad Murders, which occurred on 6 April 2012, on the Naauwhoek farm in the Northern Cape, South Africa.

The Forgotten Frontier. Colonists & Khoisan on the Cape’s northern frontier in the 18th century

By the end of the 18th century, the frontier had reached the Orange (Gariep) River and the Khoisan people