Operation Lock and the War on Rhino Poaching, by John Hanks 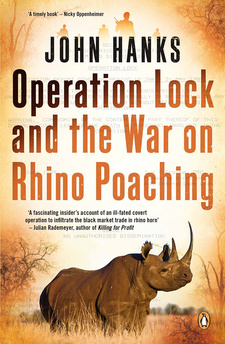 In Operation Lock and the War on Rhino Poaching, author John Hanks breaks his silence after 25 years in a gripping insider's account of one of the strangest chapters of the rhino war.

Late one evening in 1987, an extraordinary discussion took place in Lusaka's Ridgeway Hotel, one that would have a significant impact on my life. It would also impact indirectly on the emotionally charged, ill-informed campaigns to halt the appalling orgy of black rhino poaching, a slaughter that had started in East Africa in the early 1970s and rapidly spread throughout the continent. The discussion was the birth of Operation Lock, a dangerous and highly contentious undercover investigation that set out to identify and expose the individuals involved in organising the killing of rhinos in Africa and the subsequent sale of their horns. At stake was the long-term survival of one of Africa's most charismatic species, which had unwittingly become another opportunity for the hazardous underworld of illegal commodity trading, embracing ivory, diamonds, timber and drugs, all too often with high-level government connections. Driven by a sincere conviction to expose the activities of the dominant miscreants who were driving the killings, and to name them with confidence as a prelude to successful prosecution, Operation Lock embraced and touched the lives of a surprising number of well-known individuals. They came from the world of conservation, politics (particularly African heads of state), European royal families, academia, business, military counter-intelli gence and undercover surveillance. If this story was written as a novel, some might think that the events were too unlikely even for the fertile imagination of that genre of writers that delight in stretching credibility to the limits. Yet it is a true story and one that I have been reluctant to tell because of a genuine concern for the negative impact it might have on the reputations of some of the organisations and individuals involved as a result of the unexpected notoriety Operation Lock developed since its inception and subsequent closure three years later. Many journalists have approached me in the 23 years since the operation came to an end. They have all wanted my account of how it all began and the veracity of some incriminatory allegations and extraordinary conspiracy theories involving me, Prince Bernhard of the Netherlands (founder president of the WWF), South African business leaders, and even HRH Prince Philip, the Duke of Edinburgh, who was president of WWF International at the time Operation Lock was up and running. There have been so many questions about who in WWF knew about the operation. Authors specialising in conspiracy theories have had a field day, linking both WWF and Operation Lock to the secretive membership of WWF's 1001 Club and the infiltration of both by the Afrikaner Broederbond, even going as far as stating that WWF was created as a front for British neocolonial policies. What was particularly galling for me were scurrilous accusations that a helicopter used for rhino surveillance work in Zimbabwe (for which I had secured funding from a major donor) was authorised by me to use deadly fire and had killed a large number of ANC activists who were executed without any form of trial. There has been much speculation (linked to the various conspiracy theories) on how and why I got involved with the SAS-linked team that was appointed to undertake the field investigations into the illegal trade in rhino horns. The malicious and dishonest reporting that followed the exposure of Operation Lock is a classic example of the worst type of media distortion. [...]

This is an excerpt from Operation Lock and the War on Rhino Poaching, by John Hanks.

Operation Lock and the War on Rhino Poaching

Operation Lock and the War on Rhino Poaching is a gripping insider's account of one of the strangest chapters of the rhino war.

The Poacher's Moon: A True Story of Life, Death, Love and Survival in Africa

The Poacher's Moon: A True Story of Life, Death, Love and Survival in Africa is a disturbing but very good read on wildlife conservation.