One Love, Ghoema Beat. Inside The Cape Town Carnival, by John Edwin Mason. 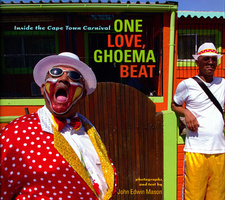 One Love, Ghoema Beat. Inside The Cape Town Carnival, by John Edwin Mason.

As a result of the research of John Edwin Mason, One Love Ghoema Beat reveals aspects that outsiders rarely see – band and choir rehearsals, life in the klopskamers (clubhouses) and the making of costumes and drums for the Cape Town Carnival.

Introduction: A minstrel troupe's klopskamer (clubhouse) can be a sleepy place, even in late December, only days away from the start of the Cape Town New Year's Carnival. On this warm summer afternoon in Hanover Park, a dusty, working-class coloured area in Cape Town's southern suburbs, the air is still and stifling. Members of the Pennsylvanians Crooning Minstrels, one of the Carnival's largest and most successful troupes, slowly trickle into the klopskamer, anticipating the evening's band rehearsal. Cars and bakkies(pick-ups) pull into the parking lot in front of the low, flat-topped building. Their occupants gather in small clusters to share a joke and a cigarette. In the front room, women work on the flowers and rosettes that will adorn the troupe's uniforms, while men talk and children play. From the back, the sweet, spicy aroma of breyani(a rice dish) floats out of a kitchen large enough to feed hundreds. In the furthest corner of the klopskamer, the senior members of the Pennsylvanians, all of them men, have a drink and assess the state of the troupe. It soon becomes clear, however, that the day is winding up, not down. Band members slowly fill the rehearsal room, children first, followed by the grown-ups. Snatches of melody from a lonely trumpet are joined by the blare of trombones and the wail of saxophones. A cacophony of sound envelops the room and is studiously ignored by everyone who's not in the band. Even the arrival of the bandmaster fails to spark much interest. The melodies are recognisable now, but everybody knows that something is missing. That something is ghoema, the beating heart of Carnival. The music doesn't really begin until it arrives.

Ghoema is a drum, a pulse and, some would say, a way of life. Its roots lie deep in the history of Cape Town and in the history of the people who created Carnival and keep it alive. Ancestors of the coloured people, the community from which the minstrel troupes draw virtually all of their members, invented the drum and its rhythms. For Cape Town's servants and slaves in the eighteenth and nineteenth centuries, ghoema was a symbol of life in the face of exile and oppression. After slavery, it came to symbolise cultural independence and continuity in the midst of segregation and apartheid. Ghoema-the drum, the rhythm and the sensibility - provided the foundation on which the culture that gave birth to Carnival was built. When the drummers arrive at the klopskamer, they aren't thinking about history or symbolism.

Their minds are focused on this year's Carnival - the massive parade through the city centre on Tweede Nuwe Jaar (Second New Year, 2 January), the countless impromptu street marches through Cape Town's working-class coloured neighbourhoods, and the inter-troupe competitions that will last well into February. Carnival's music and fellowship lift troupe members out of their ordinary routines and take them to a place where the hardships of daily life can be momentarily forgotten. But Carnival is also serious business, and the minstrel troupes are fiercely competitive. The Pennsylvanians, for instance, take great pride in their spirit, showmanship and status as Champion of Champions, a title they've earned 10 years in a row. The drummers, like everyone else in the troupe, understand that it won't be easy to retain the crown. Dozens of other troupes are eager to snatch it away. The drummers carry much of the burden of keeping the Pennsylvanians on top, for a troupe is only as good as its band, and a band is only as good as those who keep the ghoema beat.

As the sun sets and the air cools, the drummers begin the quick dum-da-dum-dum of ghoema. The atmosphere is transformed; there's fairy dust in the air. Old men, young girls, and those in between drop what they're doing and begin to dance. Others crowd into the room to get as close to the music as possible. Men and boys playing the ghoema drum (commonly called a gamie) are at the centre of the percussion corps. They are augmented by a bass drum and a tom-tom. More essential to the ghoema beat, however, are the traditional tambourines, which are made of animal skins stretched over round wooden frames; the shakers, which add a metallic shimmer to the sound; and the banjos, which, oddly enough, were borrowed from American blackface minstrelsy more than a century ago. Trumpets, trombones, and saxophones throw themselves into the mix, with the younger musicians playing music they've learned by rote and some of the older ones improvising over them. Rhythms, melodies and counter-melodies swirl around each other and then coalesce into a magnificent musical bredie (stew). (...)

This is an excerpt from the book: One Love, Ghoema Beat. Inside The Cape Town Carnival, by John Edwin Mason.

One Love, Ghoema Beat - Inside The Cape Town Carnival

One Love, Ghoema Beat offers a comprehensive look at the minstrel troupes that are the exuberant face of Cape Town's Carnival.

Gate introduces names that have been given to South African farms, and the distinctive styles landowners have chosen to celebrate the humble farm gate.