On the bridge of goodbye: The story of South Africa’s discarded San soldiers, by David Robbins 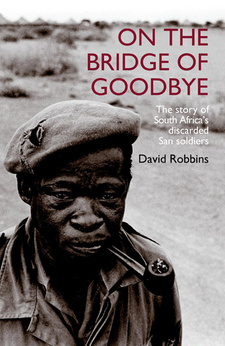 This extract is from chapter six Dancing on the bridge from the book On the bridge of goodbye: The story of South Africa’s discarded San soldiers, by David Robbins.

Author David Robbins travelled with a small group of these discarded San soldiers on a journey into their respective pasts so that he could tell their stories. The result is On the Bridge of Goodbye, a book rich in insight and emotion that culminates deep in the Angolan bush, and also in the very marrow of human loss and endurance.

By the time we had emerged through the Rooidaghek, the tank of our minibus was close to empty. We had found no petrol commercially available in Boesmanland, so we were obliged to double back to Grootfontein. It added 100 kilometres to our trip, but it could not be avoided - and it did provide an opportunity to stock up with a few refreshments for the drive to Rundu. We found a busy filling station outside the town on the main road north. The forecourt reeked of oil and exhaust fumes. Travellers mingled with local people peddling a variety of wares. The noise of engines revving and people talking in loud but generally cheerful voices jarred against the thump of frenetic music from the shiny ghetto blasters carried by the purveyors of what, to judge by the photocopied covers, appeared to be largely pirated cassettes. I saw Mario looking through the wares the music sellers had to offer. I saw him in spirited discussion with them. And when we finally drove off, he proudly displayed his purchases. We passed the tapes around the minibus. The first was called Zaiko Langa-Langa by Jetez L'Eponge, music from somewhere in Francophone Africa; the other, which Jan slipped into the player on the dashboard, went by the name of Nonstop Ndombolo Therapy. Almost immediately, township jive of the liveliest kind filled the enclosed space in which we travelled. Mario in high spirits told how he had negotiated the price per tape down from 35 to 30 Namibian dollars. He smiled cheekily, pleased with his success, his voice sometimes verging on falsetto as he chattered generally to us. The music punched and danced its way relentlessly from track to track, and sometimes Mario waved his arms and gyrated in his seat according to the rhythms the music contained. Mario began to talk about the war. Hand-grenades, mortars, air attacks, trenches. He spoke too about the devastation caused by land mines. So many millions had been laid in Angola, he said; large tracts of land had been rendered uninhabitable, made into a permanent wasteland by the war. But even these sombre recollections did not dampen his mood. He told the story of one of his sojourns in Luanda early in 1975. 'Dangerous, yes. But you are young and you feel important. You can see that you mean something. You don't think too much about the risk.' But the centre of his story concerned two brothers and their brother-in-law. The two brothers were MPLA and the brother-in-law FNLA. Mario was also FNLA during that time. The brother-in-law didn't want to switch allegiance because of respect for his commanding officer in the FNLA. When he went home his mother cried over him because he was going to be killed by the two brothers. Mario had talked to him in a Luanda hotel. 'He had tears in his eyes when he told his story,' Mario said, 'because he knew he would soon die.' [...]

This is an extract from the book: On the bridge of goodbye: The story of South Africa’s discarded San soldiers, by David Robbins.