Okavango. Jewel of the Kalahari, by Karen Ross 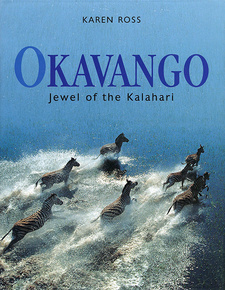 Karen Ross's Okavango: Jewel of the Kalahari presents this magical part of Africa in a novel and interesting way, the different landscapes that characterise the region, the cast - the players in this environment, the actions, interactions and quest for sustenance of the region's inhabitants.

When I wrote Jewel of the Kalahari I didn't imagine that I would spend the next decade and more living, breathing and fighting for the Okavango, not to mention falling in love, marrying and raising a child there! Well, not all in the Delta itself; but mainly in Maun, the small, dusty frontier town that is the last stop before the bush. Luckily, I have been given the chance to republish the book and call attention to the threats and opportunities that are playing out on the Okavango's natural stage. In my early days there, the only road access to Maun was along 300 kilometres of deep, rutted track. Only 4x4 vehicles could manage the sand tracks into and through town. The local pub, the Duck Inn, was like a Wild West saloon, with safari trucks parked outside like a line of horses tethered at the rail while, inside, hunters and safari operators shook off the loneliness of the bush with parties and drinking. Isolation made Maun a close-knit but wild place with few modern amenities such as television and telephones. A tar road, completed in 1993, has replaced the dusty track to Maun. It has attracted more people and, with them, cars and modern needs. From a frontier post with only four outside telephone lines, the town has progressed to the latest microwave telecommunications; the telephone pages for Maun have increased from one to ten. Many have cell phones. A small but modern airport has replaced the tiny airport shack, enlarged to take passenger aircraft including a daily flight from Johannesburg and another from Botswana's capital, Gaborone. As if to signal the passing of an era, the Duck Inn closed. My daughter Lena Rae, with whom I was pregnant when I wrote Jewel of the Kalahori is now a teenager. People grow and so do places. In essence, however Maun is the same. If you scratch the surface, beneath is the same frontier outpost - tough and gritty hot and dusty. Just as Maun has grown, so the Okavango has changed - not so much from the pressures of a livelier and more populous town, but because of a wide range of very real environmental dangers. Water extraction, cattle fences and farming are but a few. Numerous opportunities have arisen, however out of the efforts of people to preserve the Okavango and their heritage. With Maun's greater accessibility tourism and hunting in the Okavango have flourished to the point where concern is being voiced about over-crowding this delicate ecosystem. In an effort to lighten the human footprint, the Botswana authorities have wisely favoured high-cost, low-volume tourism. Tourists are flown in small planes to camps discreetly hidden in the bush, where vehicles are few. The Okavango River traverses three nations: it rises in Angola, flows through Namibia and empties onto the Kalahari sands of Botswana. The river's delta lies at the lower end of the river basin, and being so positioned is at the mercy of upstream users. In any event, water extraction from a wetland in an arid sub-continent, where summer temperatures are extreme and annual evaporation is 95 per cent of inflow, is guaranteed to have a substantial impact. Battles over water will always be a part of the Okavango's existence. [...]

This is an excerpt from the book: Okavango. Jewel of the Kalahari, by Karen Ross.

Okavango. Jewel of the Kalahari

Jewel of the Kalahari retains its wealth of information on the nature of the Okavango Delta and its inhabitants, plant, animal and human.

An illustrated and comprehensive ichthyological guide to the freshwater fishes of the Okavango Delta and Chobe River of Botswana.

Common Wild Flowers of the Okavango Delta is not only an identification Guide but also explains their medicinal uses and nutritional value.