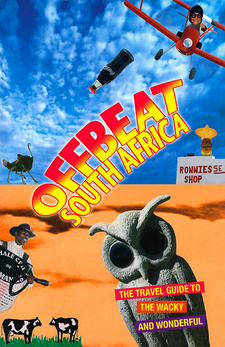 Stargazing is one of the many activities that authors Richard George, Denise Slabbert and Kim Wildman introduce to in their guide Offbeat South Africa. Many travellers are flocking to the smaller Karoo town of Sutherland to see the largest telescope in the Southern Hemisphere, namely, South African Large Telescope (SALT) first-hand. This small dorp is now touting itself as 'The Gateway to the Universe' and for good reason. Guided tours of the observatory take place daily. Accommodation is available in nearby B&Bs.

The Kruger National Park might be better known for its Big Five safaris, but don't miss out on a unigue way to experience Africa's most famous reserve, a stargazing safari. Astronomy Africa, comprising professional and advanced amateur astronomers, has partnered with South African National Parks (SANParks) and is presenting Africa's 'Big Sky' safaris. Here guides (trained as Sky Rangers) set up telescopes and take you on a voyage through the skies of our southern hemisphere. A favourite spot from which to explore Africa's magnificent gateway to the stars is from the Kruger's Olifants Camp. Your (rip will include all the usual safari goings-on (game drives and the ike) but it's at night that the real magic begins. African slar lore Is discussed and then, once darkness has settled in, guests are encouraged to view the skies through a large telescope set up nthe bush Eckhart Piprek, Director of Astronomy Africa, says, 'The night sky in Kruger is absolutely magnificent. Here is no light or air pollution and one can stargaze throughout the year.' He says that interest in stargazing has exploded over the last few years and Astronomy Africa now hosts over 25 stargazing events every month in Southern Africa. He points out that what Is most encouraging is that hotels and lodges are all coming on board in support of stargazing safaris. As a result, there are a number of other lodges in South Africa that offer stargazing safaris. The Waterberg's Entabeni Private Game Reserve has a dedicated 'astro-boma' and another astronomía is located at Zebra Country Lodge outside Pretoria. Piprek says that stargazers should also look out for a stargazing project in the making in the Bushman Sands area of the Kgalagadi Transfrontier Park at a lodge called Kleinskrij Desert Lodge. So why not try out a stargazing safari? Neptune, Scorpio and the Three Sisters are calling.

Getting there: Take the N1 toll road to Polokwane. Turn right onto the R 71 and head for Tzaneen. After Tzaneen, follow the signs to Phalaborwa. Olifants Main Rest Camp is 83 km further, so allow three to four hours driving time and enjoy some animal spotting along the way.

This is an excerpt from the guide: Offbeat South Africa, by Richard George, Denise Slabbert and Kim Wildman.

Offbeat South Africa. The Travel Guide to the Whacky and Wonderful

Offbeat South Africa - The Travel Guide to the Whacky and Wonderful is both a guide and tribute tostrange and surreal people, places and things.