Of Warriors, Lovers and Prophets. Unusual stories from South Africa's past, by Max du Preez 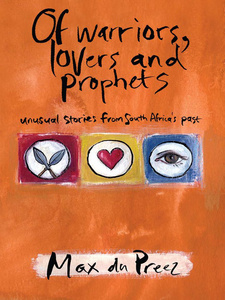 From the content Of Warriors, Lovers and Prophets: Unusual stories from South Africa's past, by Max du Preez, this is “The Graves Are Alive”:

The Graves Are Alive:

IT SEEMS THAT THE OLD SAGE MOHLOMI HAD ANOTHER foreboding regarding Moshoeshoe. When he greeted the young man after their first consultation, he told Moshoeshoe that his grandfather, Peete, the man who had brought him to Mohlomi, was his special responsibility. According to a reconstruction by the Basotho elders interviewed by Ntsu Mokhehle, Mohlomi said: "Young man, my last words to you are: always keep close to old Peete. Cherish his friendship and protect him from harm. This old man is endowed with immeasurable psychic gifts and could serve to keep those whom he loves in touch with the most illustrious ancestral souls of our clan. Old Peete still has many years to live. But when the time comes for his departure from earth to a higher plane, you must take charge of his corpse. Look after his grave, for you alone are capable of performing the ritual rites necessary for assuring his disembodied spirit safe conduct to the domain of his ancestral souls." The young Moshoeshoe was indeed close to his grandfather. Peete's actual name was Motsuane, but he was nicknamed "pete-pete", someone who repeats everything, and that became Peete (pronounced pee-heh-teh). He was so called because his father, Mualle, from the Hlubi clan, a Zulu-speaking Nguni group, spoke Sesotho haltingly and with an accent. In 1820, the young Chief Moshoeshoe moved his clan from Menkhoaneng to the flat-topped mountain at Botha-Bothe further west. This was at the beginning of the great social and military upheaval on the east coast and in the interior. It wasn't long before the Tlokoa, a Sotho group who lived in the area of modern-day Harrismith, were displaced by the marauding Ngwane and Hlubi groups. The Batlokoa in turn attacked the Bamokoteli and laid siege to Moshoeshoe's mountain. After the siege ended in June 1824, Moshoeshoe decided to relocate south to an almost impenetrable mountain fortress his scouts had discovered, called Thaba Bosiu. It was a long journey, an arduous route in the bitter cold. Horses were still unknown to the people of central South Africa at the time, so the party had to walk in single file along the footpaths through the mountains. At the back of the group of travellers were Moshoeshoe's sister, Mamila, who was ill, two of his wives, Maneko and Mamakhobalo, who were pregnant, and the ageing Peete. This slow-moving group fell behind when they had to traverse the rugged Lipetu Pass near Malimong. Suddenly a band of men jumped out of the bushes and attacked them and tried to capture the women. Men from the main party heard their screams and saved them, but the attackers had succeeded in taking old Peete and a few others with him. The attackers were cannibals under the leadership of one Rakotsoane. They duly ate Peete and his companions for supper. Moshoeshoe and his main party had meanwhile pushed on and arrived at Thaba Bosiu that night. The chief was only told of Peetes capture once he had reached the mountain. He was outraged and heartbroken. He was also deeply troubled, remembering that the great Mohlomi had given him the special task of burying Peete with dignity and performing all the necessary rituals. How would he fulfil his task now that his grandfather s body had been consumed by cannibals? [...]

This is an extract from the book: Of Warriors, Lovers and Prophets. Unusual stories from South Africa's past, by Max du Preez.