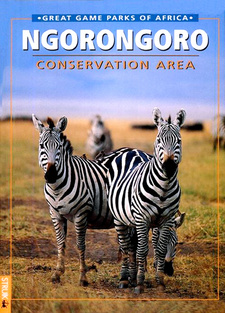 Chris and Tilde Stuart are best known for their various mammal field guides, but also for numerous other titles they have written on the natural environment of Africa. Together with photographer Daryl Balfour they wrote this guide to the Ngorongoro Conservation Area.

The beginnings of Ngorongoro Conservation Area:

Located within the crater highlands of northern Tanzania, the Ngorongoro onservation Area forms part of what is known as the Serengeti-Ngorongoro-Masai Mara ecosystem. It’s eastern boundary is formed by the western wall of the Great Rift Valley while its western boundary adjoins the world-famous Serengeti National Park. To the east lie Mount Kilimanjaro, Africa's highest mountain, and Mount Meru, and to the west Lake Victoria. Geologically speaking, the landscapes of the Ngorongoro Conservation Area are a combination of both ancient and modern geological processes. The 0l Doinyo Gol mountains and the gneiss and granite outcrops scattered across the Serengeti Plain originated several hundred million years ago. Some 20 million years ago the eastern side of Africa started to crack and rift, causing the land between the rifts to subside. This resulted in the earth's crust gradually thinning and softening, allowing molten materials to thrust to the surface and form lava beds and, later, volcanoes. Within the Ngorongoro area the oldest volcanoes - Lemagrut, Sadiman, Oldeani, Ngorongoro, Olmoti, Sirua, Lolmalasin and Empakaai - were formed along the Eyasi Rift, which now forms the towering cliffs at Lake Eyasi. In the north the rift separates the 0l Doinyo Gol mountains from the Salei Plains, but much of the early rift is now obscured by lava. It is believed that Ngorongoro once rivalled Kilimanjaro in size. The lava that filled the volcano formed a solid 'lid' which subsequently collapsed when the molten rock subsided, forming the caldera that we see today. Both Olmoti and Empakaai collapsed in a similar manner but are not as immense as Ngorongoro. Two volcanoes of more recent origin, Kerimasi and 0l Doinyo Lengai, were formed along the Gregory Rift and lie to the northeast of the Empakaai caldera. 0l Doinyo Lengai, the Maasai's 'mountain of God', is still active - its most recent eruption took place in 1983. The vast quantities of ash produced by the volcanoes have had two principal benefits: fertile soils for crop production outside the Ngorongoro Conservation Area and the maintenance of the rich savanna grasslands that support the largest ungulate herds in the world. A third and invaluable benefit has been the preservation of an important fossil treasure-trove that has enabled archaeologists and palaeontologists alike to develop a better understanding of the origins of modem man and the creatures that inhabited this part of the world, particularly at Olduvai Gorge and Laetoli. By two million years ago much of the landscape of the Ngorongoro Conservation Area had been formed but ongoing erosion and deposition continue to shape the earth's surface.

This is an excerpt from the book: Ngorongoro Conservation Area, by Chris Stuart, Tilde Stuart and Daryl Balfour.