Never too naked, by Bambi Kellermann and Pieter-Dirk Uys 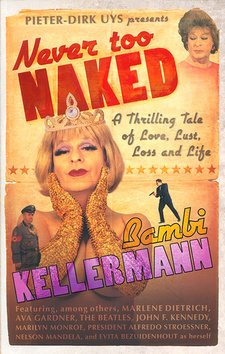 In her memories, Never too naked, Bambi Kellermann (Pieter-Dirk Uys) remembers a visit she paid to her Mother, Ouma Ossewania, in an old-age home at the West Coast.

I could never understand my sister's obsession with the small town on the West Coast of South Africa called Darling, although its name is English for 'skattie', which is the word Evita is most often remembered by. But then De Kock told me that my mother was living in the old-age home there. 'It's the only one in the country that will take her now,' he said. 'She's very difficult.' - 'She's a Poggenpoel.' - 'She insists on a braaivleis every Friday afternoon.' - 'Very Afrikaans,' I defended. 'In her room?' It seems she'd burnt down four other establishments. Evita paid this one in US dollars. I looked on my map and planned my trip carefully, not wanting to take wrong turnings and end up in a township I didn't know. It was an easy drive through the beautiful countryside. I'd never seen how magical the Swartland could look in its bright green summer hues. It was in sharp contrast to the dirty brown of a Free State winter. The arum lilies were trampling each other to get to the edge of the road and swayed gently as I passed. Nguni herds peered at me, their dappled coats and gnarled horns distinguishing them from the European cattle I'd grown up with. These were African beasts with immunity to disease and classification. I prayed that my sister would not be in town. Knowing her, she'd probably already instructed the local police to shoot me on sight. I'd phoned the old-age home and spoken to the woman in charge, who wanted to know if I was a journalist. Mrs Bezuidenhout had forbidden any contact with the media. I said no, I was a relative who'd been living overseas and wanted to see Mrs Poggenpoel. The old-age home was like all other part-time residences: whitewashed, shuttered, cement-surrounded and bland. The nurse opened the door and security gate for me. 'We lock against intruders,' she said. I wondered what could be stolen here. I was ushered into a central room that looked friendly and clean, with sun streaming through windows onto a clump of small figures bundled together in chairs. Waiting. When I was directed to the garden at the back, I saw under a shock of bougainvillea a hunched figure in a Voortrekkerkappie to protect her face from the sun. But she wore it also to remind the world who she was: Ouma Ossewania Kakebenia Poggenpoel. A black man was sitting with her and they were paging through one of four large photo albums while eating sandwiches from a lunch box. Ma looked up at me through her glasses. Her eyes were huge and blue. 'The mayor is not yet finished,' she said to me in Afrikaans. Mayor? I greeted him with respect, this man who until recently had been the gardener who had created so much of what was pleasant about the surroundings. 'Praat jy Afrikaans?' she asked, not even looking at me. I nodded. 'Vertaal asseblief vir die man. Skielik verstaan hy nie die Taal nie'. My mother still refused to utter a word in the language of the enemy, the hated British. She would even peel the labels off her pill bottles to banish the English language from her world. 'It's a hell of a confusion,' De Kock once explained. 'She still needs yellow pills to sleep and blue ones to make her stomach regular. So now they give her four of each and let her snooze on the toilet.' Ouma Ossewania gave no sign that she recognised me. She indicated that I sit on the other side of the mayor, then pointed at the pages of the photo album and explained in Afrikaans. I translated for the poor man, trapped in this web by the old spider. 'Those are photos of the leaders of the National Party,' I said, pointing to the men who had taken us down to hell. The mayor, whom Ma still called Johannes, whistled through his new teeth. 'Eish!' he said. 'Is this what they looked like? So friendly. Like any good baas.' Was he making fun of me? I glanced at his face for clues, but simply saw a fascination with the men responsible for his suffering. 'Eish!' 'Nee,' said my mother. 'Nie Uys nie; Malan. Dr D.F. Malan.' She then descended into a monologue of contempt, using Afrikaans gems for 'arsehole' and 'old twat' to describe this icon of apartheid. I found it hard to translate. 'You don't understand Afrikaans?' I whispered to the mayor. 'Of course I do, but she won't believe me. Please just translate.' The next in line was J.G. Strijdom, second prime minister, also known as the Lion of the North. Ma called him a fart and a piece of shit. 'She says she never liked him either. She says ...' - and I had to think - 'she says he had no backside.' I wanted to laugh. The mayor avoided my eyes and bit his lip. [...]

This is an excerpt from the satire: Never too naked, by Bambi Kellermann and Pieter-Dirk Uys.