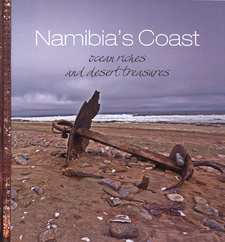 Most of the contents of 'Namibia’s Coast: Ocean riches and desert treasure' have been drawn from the valuable research, debate and thinking of others that has been presented in a variety of publications. Authors are Tony Robertson, Alice Jarvis, John Mendelsohn and Roger Swart.

Countries with coastlines are endowed with a range of environmental, economic and aesthetic benefits which are unavailable to landlocked neighbours. These include bounties of marine resources, port gateways to and from the rest of the world, beach resorts, often pleasant weather and spectacular scenery. Qualities like these, and much more, can be found along the Namibian coast which stretches 1,570 kilometres between the Orange and Kunene Rivers. There is much of value along the Namibian coast. However, the use of Namibia's coastal resources has had a somewhat chequered history. Fish, whales, seals and guano, were regarded as common property, available and free to all. People who did not take the whole resource lost out to those who did. Management of these resources was weak, indeed absent in many places over the years. Diamonds along the southern coast, as one of Namibia's most valuable financial assets, were quickly commandeered by one cartel. Public access to diamond areas along the southern coast was prohibited. Consequently, and perhaps perversely, this public exclusion from protected areas which has kept many stretches of the coastline out of reach of the local population has allowed much of it to remain relatively pristine. The Namibian coast is a fascinating place with few equals in the world. There is the stark contrast between the biologically rich Benguela Current and the Namib Desert which is home to only a few hardy specialist organisms. People have trodden the coast over hundreds of thousands of years and it was along the coast that Namibians first came into contact and began trading with people from other continents. Nowadays, almost everyone lives in a handful of towns, leaving stretches of coast over hundreds of kilometres in length devoid of human life. The current shape and elevation of the coast is similar to when it first formed some 132 million years ago as continental drift caused Namibia and South America to part ways. Many of the plants and animals in the Namib are found nowhere else in the world and are poorly known while many other coastal assets like diamonds, fish and tourism are widespread both regionally and internationally. This profile of the Namibian coast was commissioned by the Namibian Coast Conservation and Management (NACOMA) project, implemented under the auspices of the Ministry of Environment & Tourism to develop and foster an Integrated Coastal Zone Management System for the coast. Funding for the book project was provided by the Global Environment Facility (GEF), the Government of the Republic of Namibia, and the authors. The principal aim of the book is to help improve the management of the coast by providing information to a wide audience of managers, students, tourists, entrepreneurs, and the general public. It is also hoped that the book will contribute to an improved understanding and appreciation of the Namibian coast. (...)

This is an excerpt from the book: Namibia’s Coast: Ocean riches and desert treasure, by Tony Robertson, Alice Jarvis, John Mendelsohn and Roger Swart.

Landshapes. The Geomorphology of Namibia

Beautifully explains the geomorphology and the natural shapes of the Namibian landshapes, with paintings, diagrams and text.

Forests and woodlands of Namibia

Photographic study of Namibia's forests and woodlands, with extensive information on distribution and commercial uses of each species.

'Okavango Delta: Floods of Life' describes the origins, functioning, life and people of this remarkable wetland in Botswana.

A profile and atlas of the Cuvelai-Etosha basin

This atlas describes the main features of the Namibian part of the basin and provides an overview of the entire profile Owambo or Cuvelai-Etosha Basin.

This authoritative Atlas of Namibia contains a wealth of information about the land and its people rendered in both graphic and cartographic portrait.