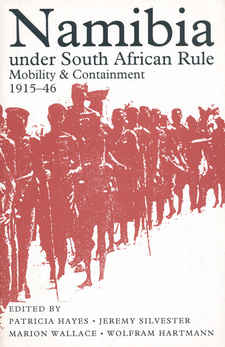 Namibia under South African Rule, edited by Patricia Hayes, is about the clashes and stresses which resulted from the first three decades of South African colonial rule.

The 'Trees Never Meet' project in Namibia, which is responsible for the present volume, has had an unusual history of collaboration. We therefore feel it important to say something about the project's process of production, about its roots and its development. Collaborative discussions began in late 1992, around the potential of connecting up the exciting, but often localised, studies which were beginning to emerge on the history of the newly independent nation. Such studies, while mostly not yet having found their way into print, were beginning to challenge older models and to develop new paradigms. Of special interest was the period of the first thirty years of South African rule, hitherto almost entirely neglected. The overarching concepts of mobility and containment seemed appropriate to a project which would engage with this emerging research, as did the proverb 'Trees Never Meet', with its message that only trees never meet, while people always have the hope of doing so. The proverb suggests not only mobility, but also human dynamism and connection. The question was initially one of space: how could a globally scattered band of researchers meet and exchange their knowledge and ideas? This tied into a second and deeper problem: that much Namibian research was being conducted by academics based at overseas institutions. Most existing Namibian scholars had been absorbed into governmental and other structures since independence; aspirant Namibian researchers faced a lack of funds and institutional support. Yet it was clear there were many Namibian historians operating beyond the university gates - both literally and figuratively. It became increasingly important to make a space where scattered researchers could engage with, and be challenged by, these historians outside the academy. By early 1994 all five editors were located in Namibia and funding had been secured. The project, together with the History Department of the University of Namibia, hosted a major conference in Windhoek in August 1994. This occasion was graced by a wide spectrum of people and brought together in one space those both inside and outside the academy. We were able to welcome not only most of the contributors to the book and project participants from Namibia and abroad, but also history teachers, students, 'oral historians' and, perhaps most importantly, a small but vocal group of those who were the agents of history between the world wars. Thus the 'Trees Never Meet' project, increasingly in the course of its work, and especially during the Windhoek conference, attempted to breach normal academic boundaries in a number of ways (although we do not claim to be the first to do so). Firstly, we have tried to straddle the gulf between the academic and the non-academic, and to explore the possibility of a participatory social history. Secondly, we have attempted to move beyond a history based purely on the printed word. The inclusion of theatre, art and photography at the conference, therefore, widened our methodological approach, and oral performances which blended personal experience with historical analysis had a resounding impact. (...)

This is an excerpt from the book: Namibia under South African Rule, by Patricia Hayes et al.

The remarkable photographs in Bush of Ghosts taken from 1986-90, show the Border War between the South African Defence Force and SWAPO.