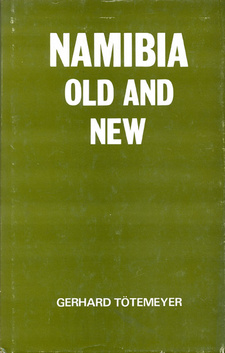 In his study Namibia Old and New, Gerhard Tötemeyer shows the ramifications of the deep - seated conflict between elites who stand respectively for tradition and for modernization.

Ovamboland, the most northerly part of Namibia, has become a focus of international political activity. Apart from containing the largest single population group - nearly half the total population of Namibia - it has recently become an active military zone following the decolonization of Angola and coming to power of the MPLA. These events have also influenced political developments in Ovamboland and the rest of Namibia. The serenity which characterized the development of Ovamboland until the 1950s has become a thing of the past. Since it was chosen by the South African Government in the 1960s as a model of its Homelands policy in Namibia, new developments - and conflicts - have become apparent there. One such conflict, which has never ceased to be intense, is that being waged between the supporters of the traditional system in Ovamboland, who see the area as a separate entity, and those who see the territory's future as an integral part of a united Namibia. This struggle is being waged especially between the traditional leaders and their supporters on the one hand, and the new, modernizing leaders and their supporters on the other. The conflict in Ovamboland reflects in microcosm the one that is occurring in Namibia on a larger scale. Ovambos were among the first to provide leadership in the awakening of political consciousness in Ovamboland and the rest of Namibia. The South West Africa People's Organization (SWAPO) originated within the cadre of Ovambo workers who were employed outside Ovamboland and who accused the Whites of exploiting their labour, and it has become the most important national political organization in Namibia.

As well as their contribution in the secular field, the Ovambos have given religious leadership as well: the Evangelical Lutheran Ovambo Kavango Church has become the first indigenous black independent church in Namibia and is the strongest single church in the territory, overshadowing the longer - established churches. This Church has an influence at all levels of society. The majority of the population of Ovamboland are members, and, next to SWAPO, it has become the principal channel for those who feel dissatisfied, exploited, oppressed or neglected. The trust and credibility which this church has built up within the community makes it an important instrument in the development process of Namibia. The growth of Black consciousness, the search for a Black identity, the awareness of the resourcefulness of Black power and the formation of their own Black theology has found substance within the Ovambo Kavango Church, with repercussions throughout Namibia.

International pressure upon South Africa, especially following upon recent UN Resolutions, to abandon and relinquish her control of Namibia has led to the search for new forms of communal development and the establishment of a new political order. SWAPO's emphasis on communalism and a unitary state has been rejected by the South African Government and by the White authorities in Namibia. This standpoint has been fully endorsed by a Constitutional Conference in Namibia, composed on an ethnic basis, convened in 1975 to decide on the constitutional future of the country. This body accepted ethnicity as the basis of power sharing and power allocation; hence Ovamboland was assured of continuing as a Homeland, with its existing system of government. This led to a new crisis in Ovamboland and Namibia. The new "deal" proposed by the Constitutional Conference has intensified the critical attitude of Black modernizing and leadership groups. The deep desire for an ethnically undivided unitary state of Namibia has thus increased. The dissatisfaction among the population has led to a renewed sense of the importance of Ovamboland's future. It is often asked what forces are going to play the most important role in the future Ovamboland, at what political cost South Africa can maintain its military presence and task force in Ovamboland, whether the traditional authority can maintain itself without White protection, and what will be the consequences for Ovamboland if SWAPO takes over Namibia?

This book will discuss these and other problems relating to the development process of Ovamboland and Namibia and attempt to provide a clearer understanding of them. It also indicates possible means of preventing a full confrontation between the traditional and the new modernizing forces, and between Black and White. A final word should be said about the author's method of investigation. In common with most investigators of political and social phenomena, he devised a series of fundamental questions and submitted these to representatives of the various elite groups of Ovamboland - traditional, modern and in between - and of Ovambos resident in Katutura, a township of Windhoek, Namibia's capital. At certain points in this book, from page 58 onwards, the answers to particular questions are presented, within the narrative, in a standard tabular form. The author is convinced that the reader will be helped by the sense of immediacy conveyed by these "raw" findings.

This is an excerpt from the study Namibia Old and New, by Gerhard Tötemeyer.

Namibia today: Challenges and obstacles to reconciliation and stability three decades after independance.

In his book, South West Africa - The last pioneer country, Molnar is not afraid to tackle many matters that are neither strictly political nor straight travelogue.