Namib: Secrets of a desert uncovered, by Mary Seely and John Pallet 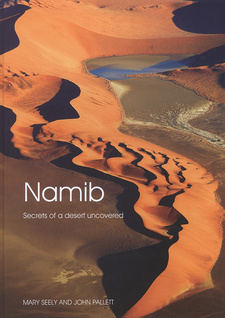 Namib: Secrets of a desert uncovered, a wonderful book by Mary Seely and John Pallet, is into regional studies.

While the Namib would be arid without the Benguela, it wouldn't experience the hyper-aridity, extensive gypsum plains, frequent fogs and great diversity of life with which we are now familiar. A unique climate and the dynamic-interface between land and sea set the stage for the myriad interactions of geology, climate, plants and animals that comprise the Namib landscape. The Benguela is one of four major eastern ocean currents dominated by a wind-driven upwelling system. The Benguela is unique on the planet, however, as the cold upwelling system, extending from Cape Point to somewhat north of the Kunene River, is bounded south and north by warm water currents, the Agulhas Current and the Angolan Current respectively. The cold, nutrient-rich upwelling supports a large biomass of plankton and fish, some of which is, in turn, consumed by coastal desert fauna such as seals and birds. And the plankton, settling on the ocean floor and decomposing without oxygen, provides the sulphur that has slowly built up the coastal gypsum plains and the occasional sulphur eruption that causes havoc along the shore and a distinctive smell on land. Land along the coast is largely sandy with some rocky outcrops, while currents shift the sand in a predominantly northward direction. The maximum spring tidal range is about two metres and the coastal water temperatures range from about 14-20°C along the Namib coast. On shore, coastal temperatures range from about 10-20°C throughout the year, although the wind-chill factor makes it feel much colder at times. Walvis Bay, located in the centre of the coastal Namib, has its warmest temperatures in winter when the east winds blow. Rainfall is very low, on shore and over the Benguela, with some years having zero millimetres recorded, although occasional high values calculate to a mean of about 15-20 millimetres per year. Fog is another prevalent characteristic of the coastal Namib and extends around 50 kilometres inland over 100 days per year. Only three significant bays and harbours occur along the coast. Luderitz and Walvis Bay are important harbour towns, while Sandwich Harbour, despite its name, was a harbour for only a very short period in its history, when whaling vessels along the Namibian coast used the protected bay as a place to render the fat from their prey into great vats that can still be seen, albeit as rusted vestiges, on the beach. The lagoon has changed dramatically in the last 20 years, due to natural changes in the spit brought about by the strong long-shore currents in the Atlantic. Reedbeds on the inland margin of the lagoon are fed by fresh water, which is believed to derive from the Kuiseb River. At one stage, apparent changes in water quality along the seepage line of Sandwich were interpreted as a consequence of increased water extraction from the lower Kuiseb to supply Walvis Bay and Rössing Mine. Phragmites reedbeds, thought to be dying out in the early 1970s, expanded considerably within the same decade, probably as part of the great natural variation experienced by all life in this coastal desert. [...]

This is an extract from the book: Namib. Secrets of a desert uncovered, by Mary Seely and John Pallet.

Namib: Secrets of a desert uncovered

Namib: Secrets of a desert uncovered features 20 chapters on the secret life of plants, rivers, animals and the shifting of dunes in the Namib Desert.

The Namib. Natural history of the ancient desert (Shell, 1987)

Shell Oil SWA published this guide to the natural history of the ancient desert Namib.

The Namib. Natural history of the ancient desert

This is a popular, well made guide to the natural history of the ancient desert Namib in Namibia.