My Hungry Heart. Notes from a Namibian kitchen, by Antoinette de Chavonnes Vrugt 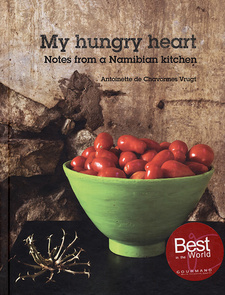 My Hungry Heart. Notes from a Namibian kitchen, a Namibian cookbook by Antoinette de Chavonnes Vrugt. Photography by Hentie Burger.

With a solid sence of humour yet not less philosophical Antoinette de Chavonnes Vrugt introduces to her fabulous Namibia cookbook, 'My Hungry Heart. Notes from a Namibian kitchen', in this following chapter.

If we could eat our country, we would. Instead it is us who are consumed by our land It might be true of all people, I think it truer of Namibians that we are products of the extreme elements that rule the skies, seas, deserts and plains of this country. Wind and sand shaped geological masterpieces over centuries and eroded abandoned towns along the Skeleton Coast in mere decades. It is by no means a 'consumer-friendly' country, this one. It does not humour mankind. It is not eager to please and will not surrender. The people that inhabit Namibia don't do so on their terms. Those who tried, ended up bankrupt, disappointed or losing their lives. The only way to be, in Namibia, is to be a part of it. That is how it works. You'll see when you look around; the leathered skins, eyes that float toward the horizon mid-sentence, forever scanning the skies for signs of rain. So absorbed are we in this country that we cannot contemplate where the land stops and the people begin. Ironically, instead of our time chasing, embracing, breathing, learning, feeling and digesting them. Freshly baked earth, ferocious camel-thorn wood fires, the icy Atlantic and as much fresh air as anyone can eat in a lifetime, these are the main ingredients of Namibian cuisine. The culture of Namibian cooking lies not in a specific style, or ingredient or technique, Namibian cooking, like life here in general, is a matter of making the best of what you have. We always have a lot of meat. We mostly have fresh produce from the sea when at the coast. The rest is always a brilliant basket of possebillities and surprises. If it does rain, which it might or might not, and life hands you a wild mushroom, you make a magical omajova pasta. If you're hundreds of kilometres away from civilisation, camping out in the open air and your child asks you for bread, you dig a hole in the ground, fill it with fire and bake one. Antoinette de Chavonnes Vrugt is a master at making the best of what's available. Her fine sense of humour, flavour and adventure forms the basis of her recipes. It might not always be obvious, but everyone who has ever fallen in love with Namibia will recognise in these recipes the red sand of the Kalahari, thorn trees covered in plush yellow blossoms, the textures of dunes, of camel-thorn bark, the laugh lines and wrinkles on old, worn skins that have seen many African summers, the happiness of a braai and a beer on a sultry summer evening, the smell of the first rain and the intoxicating effect it has on all of us. The watercolour winters, with the rugged browns and blacks and gold that move deeper and are always more honest than green and lush. The film-set magic of Swakopmund, its salty mist and cool mornings, lazy beer afternoons and deserted beaches next to an icy Atlantic Ocean. Clean, wholesome and real. The nothingness that has become everything. The way we consume this country through all our senses. And then wash it down with beer.

This is an excerpt from the cookbook 'My Hungry Heart. Notes from a Namibian kitchen', by Antoinette de Chavonnes Vrugt.

My Hungry Heart. Notes from a Namibian kitchen

'My Hungry Heart' is an inspiring cooking book packed full of diverse recipes from Namibian kitchens.

Life on a table: Stories from my Namibian kitchen

Life on a table: Stories from my Namibian kitchen is a richly illustrated cookbook with a wide range of Namibian recipes.