Murder by Consent. The Facts in the Tragedy of Baron von Schauroth, by Henry John May. 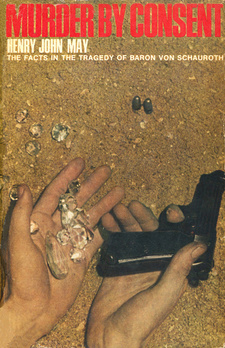 As a result of lawyer Henry John May's researches and travels, Murder by Consent gives the full story and the facts in the tragedy of Baron Dieter von Schauroth, an extraordinary crime to take place in 1961, the trial and commission.

Life in Windhoek early in 1913 was easy-going and gemütlich. The white population of the little capital was now 3,000, the non-white 11,000. South-West Africa had fully recovered from the depression caused by the rebellions of 1903-1907. New hotels had been built and new government administrative offices, the Tintenpalast (the 'Palace of Ink'), as the citizens of Windhoek still call it, had been completed. A Legislative Assembly had been established. Three castles stood on the hills overlooking the town. There was a great new military barracks within walking distance of the main thoroughfare, the Kaiserstrasse. Fine houses of an elaborate architecture had sprung up off the Leutweinstrasse, and a magnificent Lutheran church dominated the skyline. Balls were given by titled settlers whose ancestors looked down from paintings hung on richly papered walls lit by ornate chandeliers. Officers clicked their heels when introduced to the hopeful new arrivals from 'the Boatloads of Brides', as the humorists called the young women among the settlers now coming in from Germany in numbers. The Biergartens resounded to soldiers' songs, the terraces of hotels to orchestras, the private houses to the lively tunes of London and New York, reproduced by phonograph. There were plenty of young people; society was much freer and more open than at home in Germany. Life in Windhoek was lively enough. Erich von Schauroth was housed in a small bungalow off the Leutweinstrasse near Military Headquarters, where his army servant and a coloured cook looked after him. He was much in demand at the innumerable dances which were the chief form of social entertainment. His duties at Headquarters consisted chiefly of supervising personnel; and as the Schutztruppe throughout the territory now numbered only 1,600, his work was not onerous. In due course, his release from the army went through. He was placed on the reserve of officers, with a small pension, and his application to purchase Blinkoog was approved. He had at last acquired the new baronial domain of the von Schauroths. He lost no time in setting off for Karasburg. He left Windhuk by train at eight in the morning. Twelve hours later the train reached Keetmanshoop, 314 miles away. The passengers slept the night at a hotel, for the trains in South-West Africa did not then run at night. Next morning they went on to Karasburg, 141 miles further south, arriving at four in the afternoon. Baron von Schauroth took a room in the hotel. During the next week his tall, erect figure was often to be seen strolling along the only street of the village, a wide dusty thoroughfare with horses and Cape carts clustered near the four shops. Hottentots sat in groups wherever they could find a patch of shade, gossiping, greeting their friends, making their visit to the village a social occasion. Wagons with long spans of oxen waited for hours in open spaces between the scattered buildings; sheep for slaughter, their herdboys shouting insults at each other, were driven slowly to the railway station; mules and horses and donkeys wandered about trying in vain to find a blade of grass. Baron von Schauroth introduced himself to the storekeepers, inquired about wagons, trek-oxen, ploughs, chains, yokes, tents, canned foods and building equipment. He was taken aback when told that no one in Karasburg ever talked about rain but only about the lack of it. It had not rained for five years. He also went to see his friend Bezirksamtmann Beijers, who found a good and intelligent Hottentot servant for him, a man by the name of Geelbooi (Yellow Boy) who had been a stonemason, and who knew Blinkoog and the district around it. Geelbooi was five feet in height, and although only thirty years of age, his face was lined and wizened like an old man's. Accompanied by Geelbooi, whom he treated with courtesy and respect, to the amazement of the storekeepers, saying 'please' and 'thank you' when he asked and was given advice about what he was thinking of buying, von Schauroth purchased two good horses, a span of twelve oxen, and a wagon which he loaded with provisions, cooking utensils, a plough, the castle, a tent, spades, axes, packets of vegetable seeds, and building tools. Early the next day he was ready to set out for Blinkoog. (...)

This is an excerpt from the book: Murder by Consent. The Facts in the Tragedy of Baron von Schauroth, by Henry John May.