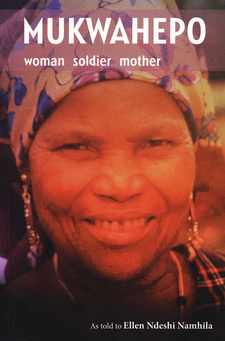 Mukwahepo: Woman Soldier Mother, by Ellen Ndeshi Namhila may be of value to African studies centres, high schools and universities and the general public interested in women's contribution towards the attainment of Namibia's independence, especially departments of History, Politics, and Gender Studies, in Namibia and all African countries.

We arrived in Nyango, a SWAPO camp in Zambia, in August 1978. We were a group of fifteen girls. All of us were survivors of the Cassinga massacre. Cassinga was a SWAPO refugee camp in Angola, which was bombed by the South African Defence Force on 4 May 1978. Following our evacuation from the devastated camp, SWAPO embarked on a vigorous campaign to find scholarships that would allow many of its young people an opportunity to study in other African countries, as well as in Cuba. The fifteen of us were interviewed by two people from the Commonwealth. We were then sent to Nyango, from where we expected to proceed to West Africa to complete our secondary education. In Nyango, we were immediately integrated with other Namibian students. One day, a group of us were sitting in the shade of a tree near the communal kitchen. We saw a small crowd walking very quickly towards us from a distance. 'It is Meekulu Mukwahepo,' one of the girls shouted. As the crowd advanced towards us, I saw about eight children walking in front of a beautiful woman wearing an African print dress. In my mind I assumed they were Zambians crossing through our camp to their homes because this had often happened in Angola, from where I had just come. As they came closer to us, one of us said, 'Walelepoo, meekul (Good afternoon, grandmother). The crowd stopped suddenly and the woman said, 'Good afternoon, children, and what are you doing under the tree?' 'We are playing games.' 'Ok, have fun,' she said. She waved at us and walked on. We saw a cloud of dust left behind by Mukwahepo and her children as they disappeared from sight down the sand path. I was impressed by the woman and her children. They gave me the feeling of a family with a purpose. I inquired from our colleagues in Nyango about who Mukwahepo was. 'Oh, you do not know who Mukwahepo is? My goodness, she is the first Namibian woman who went into exile. She was the only woman amongst thousands of men.' 'What about all those children with her, whose are they as they all seemed to be around the same age?' I asked. 'They are her children, she has lots of kids and she lives with them in a big house over there. Mukwahepo is a very important figure here in this camp. When our most important leaders visit Nyango, they all go to greet Mukwahepo at her home. They have to go to her, you understand! She is one of those who were cooked in big pots in Tanzania.' I did not ask any more questions out of fear of being seen to be ignorant. I left Nyango camp in September 1979 and went to The Gambia, West Africa, with this mental picture of Mukwahepo. I completed my secondary education in The Gambia in 1983 and returned to Angola. I was assigned to teach Namibian children at the primary school in the province of Kwanza-Sul. Unlike Nyango camp in Zambia, the camp at Kwanza-Sul was huge. I settled in an area called Lukunga. I do not know why I chose to settle there, as Lukunga was inhabited by school-going young boys and a few male teachers. It did not take me long to realise that the very same Mukwahepo, whom I had briefly encountered in Zambia, lived in the neighbourhood. [...]

The memoirs of Mukwahepo as a woman, soldier and mother beeing trained militarily by SWAPO, who was then sent to care for young Namibians who had left the country in the mid-1970s.

Native Estates: Records of Mobility across Colonial Boundaries discusses a substantial corpus of about 11 000 so-called "Native Estates" files which previously were not accessible through the existing finding aids.

Man and Myth - The Biography of a Barefoot Soldier