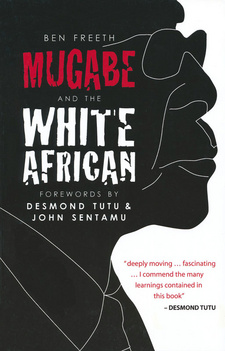 Since winning the suit Ben Freeth has been harassed and his farm burnt to the ground. His families story was made into the most-viewed documentary of the past year, which has won several international awards. Mugabe & the White African is the book to the story.

I first met him in the 1990s, in a dusty bit of veld a little to the north of the farm. The dry heat was palpable as I turned off the tar road onto a rutted dirt track leading to a run-down butchery, hoping to buy a cold bottle of Coke. Having found one, I bumped along sipping it, asking the people I passed where the rally was to be held. I soon found the place. An old army tent had been erected for the lesser dignitaries. A little to the right of it was a platform with Dralon-covered chairs and with more canvas over it. The ordinary people stood or sat in a large rough semicircle beneath the burning sky. Apart from people from the nearbv villages, numbers had been swelled with bussed-in schoolchildren in their white shirts and various coloured shorts and skirts. They were chattering away, their smiles flashing in the sunlight against their black skins. I had been told by my boss, the president of the Commercial Farmers' Union (CFU), to go to the event. It came with the job, attending political rallies. I knew what to expect by now: dusty, hot, thirsty days, mostly of waiting for enough people to turn up for it to be worthwhile for the politicians to address them. When the minister, or whoever the speaker was, finally arrived, invariably many hours late, it was always with a fresh flourish of authority, slogan chanting and fist raising. He arrived as if from nowhere. Suddenly he was right there, in the centre of a large group of security people and important dignitaries. There was a fantastic energy about him. He was walking so quickly. His face was animated and he was talking and gesticulating and moving on all at the same time. He acted like a man in his mid-fifties, not his mid-seventies. He was almost like a man possessed. I remembered trying to fight a fire on the farm once when I was caught in the path of a dust devil. The fire had already burnt through where I was standing and the ground was black and full of soot where the grass had been. As the dust devil hit, the whole world went black and I was suddenly engulfed in a blinding, swirling, dark confusion of choking debris, which settled as suddenly as it had arrived. As Robert Mugabe moved unpredictably in different directions, the people around him moved too, just like the trees and leaves and other objects caught up in the path of a dust devil, leaning over, flying up, twirling around and falling back down again. He was the centre. Whatever he did affected everything and everyone. I had never seen him close up before. 1 was struck by how small he was and yet what tremendous energy emanated from that tiny frame. The little Hitler moustache and the elegantly tailored suit added to the aura of authority that surrounded him, to the confusion of all those around. In the heat haze and the dust I could imagine bullets cracking as he spoke from the podium, his voice snapping and whispering, rising and falling, breaking from English to Shona and then back again. His fist always seemed to be upraised, as though anger had completely mastered him and even the veld was his enemy. (...)

This is an excerpt from the book: Mugabe & the White African, by Ben Freeth.

Mugabe and the White African is a first-hand account of the madness that engulfed Zimbabwe.

Zimbabwe: Paradise Plundered is the memoires of a tobacco farmer and pilot of the Police Reserve Air Wing of Rhodesia.

Memories of a Scientist. The Carp Expedition to the Save River in Zimbabwe and Mozambique

'The Quarry' is a stark, intense, and crystalline novel in which human nature is set against the desolate backdrop of rural South Africa.