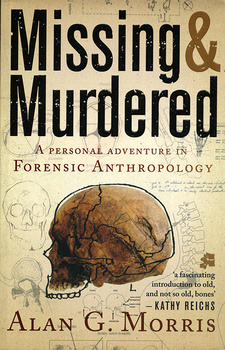 Missing & Murdered, an informative, original and engrossing read from one intriguing chapter to the next, is not a textbook on forensic anthropology. While Alan G. Morris discusses some anthropological techniques, he has avoided technical jargon as far as possible, as he would like the forensically uninitiated to understand and enjoy it.

[...] I have written about cases in which I have been involved and those that have influenced my thoughts on forensic science and anthropology, but I've aimed to go beyond the clinical cases. Thirty per cent of the cases that are brought to me by the police are archaeological and don't involve anything more than a brief report to the investigating officer so that he can close his file and move on to the next inquiry. The investigating officer may have lost interest in the old bones in question, but I remain fascinated by them. The methods I use when working with skeletonised human remains all come from physical anthropology and its specialised subdivision, skeletal biology. My own training is much closer to 'bioarchaeology' than it is to forensics. Although forensic anthropology is grounded in the sciences of anatomy and medicine as applied to the law, it cannot survive without an understanding of the nature of history, politics and social anthropology. In this book I do not hesitate to delve into all three when the occasion demands it. Secondly, in this book I wanted to describe the nature and importance of forensic anthropology in southern Africa. I know that I run the risk of making the book too 'local', but I hope that not all readers will see it that way. Nearly all of the forensic anthropological research that has been published to date is by European or North American authors. Their work is very valuable: much of it is ground-breaking and a source of wonderful information that is universally useful. But the experience of the practice of forensic anthropology is not the same everywhere. Human biology differs from region to region, and techniques that work well in Boston may not be applicable in Botswana. Laws and cultures also differ and, although the nature of police work and the gathering of evidence might be the same everywhere, the interpretation of the data may vary in different locations. There is almost nothing published about this from an African perspective. In the context of forensic anthropology, South Africa is unique and can contribute to this field of study. Of critical importance is the depth of human presence on the continent. We have evidence of the remains of people who were alive tens of millennia before the ancestors of the modern North American First Nations set foot on the coastal plains of Alaska. At least a third of living people in Cape Town can track directly their own lineage back through mitochondrial and Y-chromosome DNA to forebears who lived in southern Africa a hundred millennia ago. But such antiquity, although of interest in anthropological science, is of relatively little use in the practice of forensic anthropology. Much more important is the modern dynamic in South African society, which offers us a workshop of humanity that is rarely paralleled in other places. Capetonians proudly call their town the 'Tavern of the Seas', where mariners have stopped for over 300 years to obtain fresh supplies, rest in the lee of Table Mountain and weave their genes into the fabric of Cape society. Some came willingly as traders and settlers, while others were brought here against their will as part of the slave trade. In downtown Cape Town you will meet people whose ancestors hail from Batavia (now Jakarta) on the Indonesian coast, or Ceylon (Sri Lanka) or southern China. Their ancestors could be from the Hook of Holland, the villages of Cornwall, the principalities of Germany or the shtetls of Lithuania. [...]

This is an excerpt from the book: Missing & Murdered, by Alan G. Morris.

The report Missing & Murdered, a personal adventure in Forensic Anthropologie, is a facinating introduction to old, and not so old, bones.

Report on some Fossil Human Remains from Otjiseva

The fossil human remains from Otjiseva were found during street repairs in 1964.

Field Guide to the Cradle of Humankind

This Field Guide to the Cradle of Humankind caused a considerable stir among professionals in the field of palaeoanthropology and sparked a flurry of newspaper articles, journal articles and general debate.

A Guide to Sterkfontein and the Cradle of Humankind

This most interesting guide introduces the palaeo-anthropological sites of Sterkfontein and Gladysvale in South Africa as cradle of humankind.

Field Guide to the Battlefields of South Africa

The Field Guide to the Battlefields of South Africa presents 71 battles, giving directions and co-ordinates, while timelines place each battle in its time context.