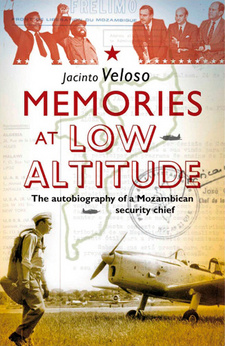 A story of war and peace in Mozambique and beyond, Memories at Low Altitude spans four decades of southern African history, from the point of view of one of its main protagonists, Jacinto Veloso.

I left Mozambique on 12 March 1963. It was a Tuesday, and I was 25 years old. At the time, Lieutenant Colonel Miranda was in command of the Portuguese Air Force in northern Mozambique. Although I had good reasons for leaving the air force, when I departed I was well aware that I had left the commander with some immediate problems. However, I also hoped that one day I would be able to give him the explanation that he, as a friend, deserved. Fortunately, 22 years later, I had that opportunity. The departure point that Tuesday in 1963 was Mocimboa da Praia. Although I have forgotten the exact time, I know it was after the lunch I had with the Mocimboa administrator, with Inspector Rocha, collector of seashells and head of 'anti-subversive' activities in northern Mozambique, and with my long-time friend Joao Ferreira, in the residence of the district administrator. And perhaps because this was a memorable day in my life, I can remember exactly what we ate: grilled squid with boiled potatoes. We took off at about 14.00, or perhaps a bit later, because I recall that after the meal we spent some time telling jokes in order to relax. There was a certain tension in the air, affecting us, which I think is perfectly normal in such a situation. We were carrying out an important decision, and facing serious risks. Everything had been arranged in advance. At the time, I was based in Mueda and I had flown to Mocimboa specifically to meet up with Joao. From there we would fly on to Dar es Salaam. We were going to fly in a Harvard T-6, an American two-seater plane normally used for training, but which the French had adapted for ground attack in the war in Algeria. Portugal had purchased from France a number of these planes, which were equipped with machine guns, rockets, bombs and other ground-attack materials. In fact, some months earlier I had been in Mocimboa da Praia and had taken the administrator, a man named Chambino, for a short joyride in the plane. I performed some aerial acrobatics which greatly impressed him - or rather, which impressed his stomach, for he vomited profusely. And so, on 12 March, it was the administrator himself who proposed that I take Joao up, to see how his stomach would behave. I did so willingly. Indeed, this proposal greatly facilitated our plans. When he heard that I was going to fly, Inspector Rocha offered to drive us to the airstrip. I said that it wasn't necessary, since Chambino's driver could take us, and in any case we would soon be back. In a very friendly manner, Rocha insisted on accompanying us. I already had a bag in the plane with some personal belongings - not many, obviously - but Joao couldn't take anything at all, since our pretext was that we were just going to take a short test flight. And to some extent it was indeed a test, since the plane had demonstrated some engine problems on the flight from Mueda to Mocimboa da Praia. When I was climbing into the aircraft to take off, Rocha asked me, 'So shall I wait for you?' With an unconcerned expression I replied, 'Sure, wait for us because I'll be straight back.' And I left! Twelve and a half years later, Mozambique was independent and I heard from the inspector again. One day, someone phoned me from the Ministry of Information and announced himself as Rocha, Inspector Rocha. At first I didn't remember who this Rocha was, but suddenly it dawned on me and I exclaimed, Ah! Inspector Rocha, collector of seashells! You were the man who drove me to the airport in Mocimboa da Praia in 1963, weren't you?' - 'Exactly!' he replied. And if I had followed your advice and waited for you to come back, I'd still be waiting there today!' The weather that day seemed to collude with the strangeness of the situation: there were a lot of clouds and a certain instability in the air. It had rained heavily in that area and conditions for flying were not very good. When we flew over the Rovuma River, I thought, 'Now we're in Tanganyika. With a bit of luck, we'll reach our goal'. As we flew northwards towards Dar es Salaam, we crossed the Rufiji River, which was completely flooded due to the torrential rains. (...)

This is an extract from the autobiography: Memories at Low Altitude, by Jacinto Veloso.

A story of war and peace in Mozambique and beyond, Memories at Low Altitude spans four decades of southern African history.

Dingo Firestorm. The greatest battle of the Rhodesian Bush War

Dingo Firestorm is a fresh, gripping recreation of a major battle in southern African military history and Rhodesian Bush War.