Mandela. A Life, by Adrian Hadland and Sean Fraser. 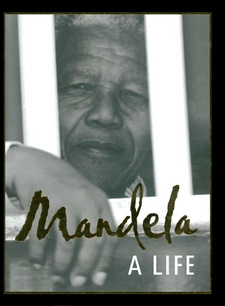 Few Politicians in the history of the world have attracted such widespread veneration as is bestowed on the figure of Nelson Mandela. Mandela. A Life by Adrian Hadland and Sean Fraser documents the medial phenomenon in over 100 100 b/w and colour photos.

Like so many heroes, Mandela's origins are to be found in the humblest of circumstances. On the day of his birth, 18 July 1918, his home in the village of Mvezo in what is now South Africa's Eastern Cape province consisted of three mud huts: one for sleeping, one for cooking and one for storing food. Each of the huts had been crafted by the hands of his mother, Nosekeni Fanny, from soil moulded into bricks. In the living hut, which Mandela shared with his two sisters, chairs and cupboards were made from soil. There were no beds or tables, and the family slept on mats. The roof was made of bales of dried grass tied together with rope. Mandela's father, Hendry, had four wives of whom Nosekeni was the third. He was a strict, stubborn, illiterate man who was both tall and proud. Royal blood from the Thembu people ran through his veins. The year after Mandela was born, Hendry was stripped of his chieftainship after a quarrel with the local white magistrate over an ox. Hendry refused to budge from his stance and consequently lost most of his cattle, land and income. No longer able to provide for his four wives and 13 children, he was forced to break up the family. He sent Nosekeni to live in the village of Qunu. It was here that Mandela, whose given name at birth was Rolihlahla (which means 'pulling the branch of a tree' or troublemaker) spent most of his childhood. Mandela recalls his years at Qunu with nostalgia. His memories of swimming in rock pools, of drinking warm milk straight from the udder, of the traditional stick fights with his peers and of the overwhelming beauty of the gently undulating, verdant countryside of the Transkei were to keep his spirits high during some of his bleakest moments. For Mandela, home will always be Qunu. It was at school in Qunu that Mandela was given the name of Nelson. It was a common practice for children educated in mission schools at that time to be given an English name, very often that of a British imperial hero. On the premature death of his father, the nine-year-old Mandela was adopted by his uncle, Jongintaba Dalindyebo, Regent of the Thembu. It was a position Jongintaba had secured in part with the backing of Hendry Mandela, a royal counsellor. Jongintaba lived in relative splendour at the seat of the Thembu royal family called Mqhekezweni, The Great Place. It was here that Mandela was introduced to many things that were to have a profound impact on him. It was in Mqhekezweni that Mandela sat around the fire listening to the tribal elders tell stories of great African kings and warriors. He has often reflected on the impact such stories had on his young character: 'Many years ago, when I was a boy brought up in my village in the Transkei, I listened to the elders of the tribe telling stories about the good old days, before the arrival of the white man. Then our people lived peacefully, under the democratic rule of their kings and their amapakati, and moved freely and confidently up and down the country without let or hindrance. Then the country was ours, in our own name and right. We occupied the land, the forests, the rivers; we extracted the mineral wealth beneath the soil and all the riches of this beautiful country.' It was in Mqhekezweni, too, that Mandela - secretly at first - sat in on the tribal council meetings of the Thembu. People travelled many miles to attend such meetings and each person was given an opportunity to speak. Decisions were only reached by consensus or were delayed until a future meeting. It was here, where he shared a hut with Jongintaba's son Justice, that Mandela blossomed as a student and where he underwent circumcision. (...)

This is an excerpt from the book: A Life, by Adrian Hadland and Sean Fraser.