Kirstenbosch Birds and Other Wildlife, by Peter Ryan 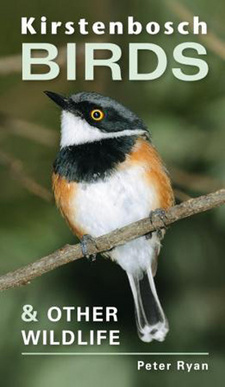 Targeted at both regulars and new visitors to the Kristenbosch gardens, 'Kirstenbosch Birds and Other Wildlife' by Peter Ryan raises awareness of the rich and diverse animal community.

Nestled against the eastern slopes of Table Mountain, Kirstenbosch is one of the most scenic botanical gardens in the world, and a premier tourist attraction in Cape Town. The garden lies adjacent to the Table Mountain National Park and, despite the large number of visitors, it provides a diverse range of habitats for birds and other animals. Even a brief stroll through the landscaped garden should yield Helmeted Guineafowls and Egyptian Geese on the lawns, and a range of songbirds in the adjacent flowers and shrubs. This guide illustrates the common bird species found in the garden, and on adjacent Table Mountain, providing a brief overview of their key identification features and typical behaviour. A synopsis of other wildlife found in the garden is given after the bird species accounts. The book starts with birds of the open lawns and waterbirds, followed by bush birds, then birds most likely to be seen flying over the garden, and concludes with nocturnal species. The texts are brief, with less space devoted to identification of species that are distinctive. Similar-looking species are grouped together to facilitate identification. Rare species and vagrants are mentioned in the account of the species they most closely resemble, but a few single-record vagrants (e.g. Black Cuckooshrike Campephaga flava and Cape Gannet Morus capensis) are omitted. The book concludes with a more general discussion of the invertebrates, mammals, reptiles, amphibians and fish occurring in the garden and its streams. Three main terrestrial habitats occur at Kirstenbosch. The landscaped garden is a mix of lawns and planted beds, thematically arranged, with each representing a different regional flora in South Africa, or a specific group of plants (e.g. cycads, aromatic plants, or plants useful to humans). Streams running through the garden support dense woodland, which merges into Afromontane forest in the sheltered kloofs of Skeleton Gorge and Nursery Ravine. The more exposed mountain slopes are clothed in mountain fynbos, the remarkably diverse flora that forms the heart of the Cape Floristic Kingdom. Higher still, there are rocky outcrops and cliffs that provide nesting sites for a range of raptors and other birds. Guineafowls, Cape Spurfowls, Hadeda Ibises, Cattle Egrets and Egyptian Geese, doves, starlings, canaries and seedeaters feed on the lawns. Swee Waxbills add a splash of colour as they flush from the grass to shelter in the adjacent bushes. In the early morning, Olive Thrushes and Cape Robin-Chats hop along the borders, and their alarm calls often betray the presence of a small grey mongoose. The birds of the planted beds vary depending on the structure of the vegetation and the availability of fruit and flowers. Cape White-eyes and Karoo Prinias are ubiquitous, as are Southern Double-collared Sunbirds, but Orange-breasted Sunbirds are confined to fynbos in the erica and protea beds. Cape Sugarbirds occur in areas with flowering proteas, whereas Malachite Sunbirds are rather erratic, arriving when favoured food plants are in flower, such as aloes and Wild Dagga Leonotis. Fruiting trees attract mousebirds, bulbuls, starlings, robin-chats, thrushes, white-eyes and African Olive Pigeons. Some birds sit on exposed perches. Common Fiscals hunt from such supports, while African Dusky Flycatchers hawk insects from trees and low perches. African Olive Pigeons, Red-winged Starlings, Pied Crows and raptors can be scanned from dead snags at the tops of trees. In summer, the airspace over the garden is often busy with swifts, but swallows are surprisingly scarce, apart from the Black Saw-wings. White-necked Ravens, Pied Crows and a variety of raptors often fly overhead. The small ponds and streams are usually too disturbed by tadpole-hunting children to support anything other than Egyptian Geese, but an early morning visit may produce the resident pair of African Black Ducks. The marshy area below the Botanical Society office has Levaillant's Cisticolas and Little Rush-Warblers. Occasionally, the weird twanging calls of a Red-chested Flufftail may also be heard here. Many birds are more often heard than seen, and knowledge of bird calls is invaluable in locating many species, such as cuckoos.

This is an excerpt from the guide: Kirstenbosch Birds and Other Wildlife, by Peter Ryan.

This new larger illustrated guide is based on the recently updated fourth edition of the standard-format Sasol Birds of Southern Africa.

Chamberlain's Birds of Africa south of the Sahara Edition 2010

Despite its exceptional coverage, Chamberlain's Birds of Africa south of the Sahara Edition 2010 is compact enough to use in the field, and follows the standard field guide format.

This complete photographic field guide to birds of Southern Africa describes and illustrates all 958 birds, plus 17 species from Antarctica and Southern Ocean Islands.

Birds of Africa south of the Sahara

What to look for when purchasing equipment, what field guides and other resources exist, and how cultivate skills in the field