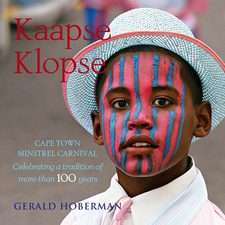 Cape Town was introduced to the buoyant musical style of African-American minstrel troupes when the Confederate warship Alabama called at the Cape to take on supplies in 1862. Impromptu performances were given by the ship's slaves, and throngs of locals (many of whom were recently freed slaves themselves) responded with great enthusiasm. Kaapse Klopse: Cape Town Ministrel Carnival features extraordinary contemporary photographs of recent events by Gerald Hoberman.

This is an excerpt from the book: Kaapse Klopse: Cape Town Ministrel Carnival, by Gerald Hoberman.