Justice Denied: The Role of Forensic Science in the Miscarriage of Justice, by Klatzow David 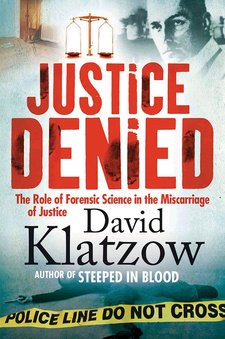 To speak clearly, forensic science is neither clearcut nor easy to interpret, and practitioners are not all competent, as renowned forensic scientist Dr. David Klatzow proves in Justice Denied: The Role of Forensic Science in the Miscarriage of Justice.

The concept of justice goes far back into the dawn of recorded time. The ancient Egyptian tombs show ample evidence of weighing the soul of the dead, an idea illustrated in the Book of the Dead, an ancient Egyptian funerary text designed to assist souls through the underworld to the afterlife. In modern times, the concept of justice is represented by the Roman goddess Justitia, or Lady Justice. She is usually portrayed as a blindfolded woman with a sword in one hand and scales in the other. The symbolism is unequivocal and simple: justice should be blind; your class, colour, wealth and rank should play no part. The scales tell us that evidence must be weighed, the issues viewed in a balanced way. (Lawyers speak of something being proved 'on the balance of probabilities'.) The whiteness and simplicity of her toga-like gown speaks to the need for justice to encompass not only a civilised legal component but also a greater moral purpose. Our judges are steeped in this tradition. They are referred to as 'the honourable Mr Justice So-and-so'. They wear robes that set them apart from the masses, and in the High Courts are addressed as 'My Lord' or 'My Lady'. The courts resound with obsequious phrases, such as 'If your Lordship pleases' and 'May it please the Court, your Ladyship'. Invariably the judicial bench is physically elevated well above the rest of the court. The purpose of a court is to see to it that some form of justice is meted out to those unfortunate enough to end up in front of the judge presiding. Increasingly it is accepted that the law should be tempered with equity to better ensure that justice is served. Does this happen in practice? I would venture to say not often. The legal process is a very expensive one; often justice is not achieved because the parties are not able to afford the costs. Costs of advocates and their instructing attorneys mount up alarmingly. If a senior counsel, together with junior counsel, is employed, the costs rapidly become stratospheric. This situation is made worse by the fact that the loser in most court actions is burdened still further with a costs order for the winning side's expenses in addition to his own. Should a party be acquitted in a criminal case, no costs order is awarded against the state, as would occur in a civil matter. As several of the cases discussed in this book reveal, the accused also often lacks the necessary finance to employ adequate technical forensic expertise to challenge the vast resources of the state. In his book The Log from the Sea of Cortez, John Steinbeck paints a poignant picture of his friend Ed Ricketts, the famous doctor from Steinbeck's Cannery Row and Sweet Thursday. Ricketts went to the Superior Court in Salinas, California, seeking recompense for a fault of the electricity company whose negligence had caused his laboratory to burn down. In the ensuing court case, the doctor examined the legal system in the same way as he would have examined a new species of sea life as a biologist, and came to the conclusion that neither side wanted the truth. [...]

This is an excerpt from Justice Denied: The Role of Forensic Science in the Miscarriage of Justice, by Klatzow David.

Justice Denied: The Role of Forensic Science in the Miscarriage of Justice

Ten forensic disasters exposed in Justice Denied: The Role of Forensic Science in the Miscarriage of Justice.