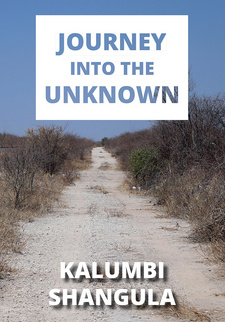 It is hoped that Journey into the Unknown, written by Kalumbi Shangula, will give the reader insight into the experiences of exiles which people have talked about many times but which have rarely been documented in writing.

I vividly remember the year 1974. I was in Lusaka, Zambia, when I received information that several groups of Namibian youth were crossing the border into Angola in big numbers and that they were arrested by the Portuguese authorities. The SWAPO leadership met and decided to request the military regime in Portugal to release all these Namibi-ans and allow them safe passage into Zambia. This request was made through the United Nations Organization. SWAPO immediately mobilized resources to cater for the new arrivals. The biggest challenge was how to provide the large groups of women and children with shelter, food, clothing and especially schooling for the school-going children. We had to prepare for all contingencies for those whose education career was disrupted by their exodus because of the oppression and their commitment to liberate Namibia. Despite these obvious challenges, we were extremely happy that a large group of Namibians had arrived to reinforce us. The overthrow of the fascist regime in Portugal opened for us the prospect of extending our armed liberation struggle across the Angola-Namibian border which had been logistically difficult as we had to pass through enemy territory. We were convinced that the imminent independence of Angola would provide us with a reliable rear base and a safe passage from Zambia into Namibia. The newly arrived Namibians also served as a source of information on enemy conduct and intention, and we were able to update our intelligence on all fronts. On a personal note, I was extremely happy to be able to be reunited with my sons, Utoni, John and Nefungo, whom I had last seen in Namibia before my departure in 1960. The SWAPO leadership made arrangements to cater for the needs of the new arrivals and to reinforce the liberation struggle. In the same year, a total of 160 young cadets were sent for military training to the Soviet Union in three groups. Other cadets were sent to Tanzania, while others were undergoing training in our own training centers. The youngest children were enrolled in our school which was run by Nahas Angula at the "Old Farm" outside Lusaka. Older children were sent to West Africa to complete their secondary education. Some of the youth leaders were sent to undergo political education in the Soviet Union, while other new arrivals were absorbed into the administrative machinery of the Party or sent on diplomatic missions. Though the exodus was sudden, the SWAPO leadership was not found wanting in receiving them and placing them properly. Over the years I have encouraged Namibians to document their experiences. When Dr Kalumbi Shangula asked me to write the foreword to the book he intended to write, I did not hesitate to give him my blessing. I am therefore happy to author the foreword to this book. It makes interesting reading, especially his presentation of events. I encourage everybody to read Journey into the Unknown, and I encourage Namibians to develop a culture of writing and reading.

This is an excerpt from Journey into the Unknown, by Kalumbi Shangula.

Journey into the Unknown

Journey into the Unknown relates the moving and exciting story of Dr Kalumbi Shangula, Namibia's Minister of Health and Social Services.

A striking report from the economic frontier, Continental Shift: A Journey into Africa's Changing Fortunes follows the money as it flows through Chinese coffers to international conglomerates, to heads of state, to ordinary African citizens, all of whom are intent on defining a metamorphosing continent.