Journey through north-western Namibia. A photo companion to the attractions of the Kunene and Damaraland regions. Author: Sakkie Rothmann. Second print. 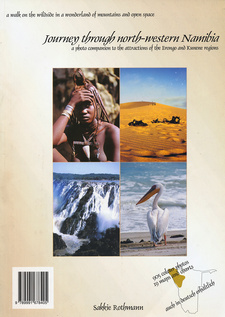 The phenomenal rich and heterogeneous cultural heritage of the nations and scenic attractions in north-western Namibia, have for various reasons, as yet not received the same attention. Sakkie Rothmann was prompted to compile this book in an attempt at closing this gap in the tourism literature about Namibia's journey highlights.

(...) Roads in some of the north-western regions of Namibia were a few years ago non-existent and drivers had to feel their way through the muddy waters, which turned roads into rivers during the summer months. Getting stuck for hours on end was a seasonal occurrence. These are now dangers of the past and vehicle travel is on good roads (some in the Kaokoland and western Damaraland not on roads but on-not-so-good tracks!) but dangerous wildlife is today mostly confined to the game reserves and the various game parks. Long ago the tribal villages where surrounded by forests, packs of hunting dogs, herds of elephant and not so friendly rhino, which is today not more the case. However, travelling on the Kunene in a sausage-shaped dugout wooden canoe sitting most of the time below water level with a baling tin in your hand and a wet bottom is still very much a reality. All this is north-western Namibia that is still described in literature as a semi-desert, arid, hot and a very dry place. But where there is water, there is life and nowhere in Namibia can so much diversity be seen as in the northern regions. This is where the peoples of Namibia are, where breakfast is mostly a water solution of pearl millet (mahangu) in the morning, where life starts with the rising of the sun and where people eat their main (or only) meal in the evening. Where people like the Himba still cling to their traditional attire and were distances is still measured as how far a person can walk in half a day or from sunrise to sunset. Where people must talk loud during a meal or else it might be thought that the food is stolen giving the reason for eating quietly. Where people out of respect wait until spoken to. Where young girls of eight years old still piggybacks little bother or sister or attend the maize stamping block for mother. Where certain fruit bearing trees is inherited because of the yearly rich harvest of fruit. Not understanding the long trousers and long sleeved shirts of the early European visitors, it was asked in the long past by these people why white people put their arms and legs in bags? Where young boys still play with bow and arrow as they walk day after day with the family's animals in hidden valleys. Where milk is still churned under a tree and dishes are still made from natural butter and honey still taste like honey. Where in the old times elephant tusks and rhino horn were seen as bones, discarded or exchanged for necessities. Go north to where the solitude and wide-open spaces are. Where the only night sounds are those of your campfire, a chorus of crickets and geckos complimented by the hoot of a nearby owl and the creaking of your vehicle in chilly nights. Where the sunsets are still red and orange and the stars and milky-way shows you were is south, east or west and where birds are still singing in the rain. Or meeting a family in the middle of nowhere with all their earthly possessions like calabashes, bedding, food, seed and children, a few goats, three dogs looking like bags of bones and some live chickens for food for the road. Still the same genuine "old people" of many-many seasons and hundreds of moons ago. His name could not be pronounced but he said to me to call him "Fig leaf" because that is the first nice sounding word his family found in an English bible when they baptised him! These and many-many more are found in north-western Namibia - from the Kuiseb to the Kunene River. Go there, spend more time and be surprised.

This is an excerpt from the book: Journey through north-western Namibia, by Sakkie Rothmann.

Journey through north-western Namibia is a photo companion to the attractions of the Kunene and Damaraland regions.

The harsh and forbidden Sperrgebiet rediscovered: A tourist guide to the diamond coast. Lüderitz, Oranjemund, Aus, Rosh Pinah and the border regions.

More than grains of sand: Comprehensive travel and photo guide to the Namib Desert in the Republic of Namibia

Travel and photo guide 'More than grains of sand' introduces Western Namibia ranging from the the Sperrgebiet to the Kunene.