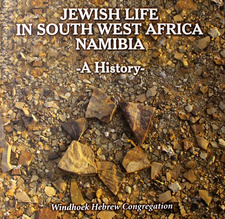 The book Jewish Life in South West Africa / Namibia: A History covers a time from the arrival of the early European settlers in the then Deutsch Südwestafrika in the late 1800's to a post independent Namibia in the new 21st Century. For a land that has one of the oldest deserts in the world, this is but a moment in history. In this short period, it is amazing how so few people were able to accomplish so much to assist in the development of this country in every aspect of life in the country, including Economics, Sport, Art, Social life and Commerce. The size of the Jewish Community in Namibia has decreased rapidly over the last few years. It was felt that a permanent record of the community from its beginnings up to contemporary time was essential to tell the story of those who lived here and those who still live here, their contributions to the country and the Community and the roles they played in this wonderful country of ours. It also contains a record of the Jews of Namibia who now live outside of the country. Their contribution is worthy of remembrance and their place in this book adds to its impact. Families and individuals were contacted and their biographies and reminiscences form the backbone of the book. Many were able and willing to add to the history of the Jews of Namibia and filled many gaps which were thought to be lost. The content also contains many anecdotes and events which we hope you will find both interesting and entertaining. It is more than merely a biographical account of the Jews of Namibia, past and present. We have endeavoured to present as true as possible an account of a very special Community who flourished in a far off country and have left their indelible mark on the history of the country. It is a reflection of a social and communal contribution, on both a personal and professional level. To everyone who gave of their time to provide the information for this project we thank you very much. To all who have been actively involved in collecting, collating and editing the vast amount of material from the inception of the project to the final publication, your contribution has been invaluable. Toda Rabba. This book on the Jewish Life of South West Africa/ Namibia has taken many years to complete. It has been a dedicated project to record the history of a unique Community in a unique country in Africa.

Carl Bloch, born in Austria in 1869, became a watchmaker and jeweler, and a naturalized British subject. In Southshields, England, he married Sarah Rivka Epstein, born in England in 1889. Possibly with the first and second of their four children, they immigrated to South Africa and settled in Cape Town, where Carl found employment in his profession. Their third and fourth children were born in Cape Town. In the 1920s, Carl and Sarah moved to South West Africa to be close to two of their children who already lived there, Eva in Walvis Bay and Harry in Windhoek. They settled in Swakopmund, where Carl opened a business as a watchmaker and jeweler and which he ran until his death. Sarah died on 26/7/1930, and Carl on 14/3/1932. They are buried side by side in the Swakopmund Jewish Cemetery. [...]

This is an excerpt from Jewish Life in South West Africa / Namibia: A History, by Windhoek Hebrew Congregation.

Full of most interesting biographies, the book Jewish Life in South West Africa / Namibia: A History, was published by the Windhoek Hebrew Congregation after many years of compliation.

SWA Fables: The guinea-fowl and other fables from South West Africa

SWA Fables: The guinea-fowl and other fables from South West Africa is a well known and popular children's book in Namibia in English, Afrikaans and German.