Into the River of Life. A biography of Ian Player, by Graham Linscott 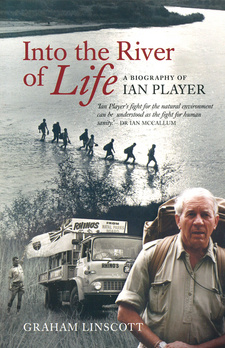 Having known Ian Player for more than 30 years, Graham Linscott is well-placed to wirte his biography. While careful not to adopt too devotional a tone, Linscott’s obvious admiration for his subject’s achievements makes Into the River of Life: A biography of Ian Player consistently engaging and sympathetic.

Early Years on the Highveld

Ian Cedric Player was born into an environment that would hardly have presaged a future in the remote African wilderness. Arriving at the Queen Victoria Hospital in Johannesburg on 15 March 1927, he spent his early years in a humble wood and corrugated iron home at the Robinson Deep mine - once the deepest gold mine in the world, just off Sauer Street to the south of the city - where his father, Francis Harry Audley Player (Harry to his friends; Audley to his wife, Muriel) was a shift boss. The surroundings were bleak indeed. The open grassland of the Transvaal had given way to the spinning headgear and grime of the gold mining industry, the huge, powdery mine dumps and the massive yellow slabs known as slimes dams, where slurry had been pumped after into the river of life extraction of the gold, there to solidify into fortress-like eminences where not a blade of grass grew. The mine dumps with their fine dust were a curse to all the housewives, because when the north wind blew the dust settled on the houses and there was not a nook or cranny where it did not reach. The same dust underground, before the invention of the water-drills, also led to phthisis amongst the miners. Harry was a victim and he eventually died from this disease, which clogged the lungs. The lakes and dams in the vicinity were sterile, poisoned by the chemicals used in the extraction process. And the landscape was otherwise covered by a sprawl of low-cost, uniform housing with small gradations befitting the occupant's rank within the industry. A mine manager had a solid, fairly imposing home with verandahs and a decent-sized garden. Since Harry was a shift boss, the Player family had the privilege of a tiny garden, which Muriel, who was a keen gardener, turned into a blaze of colour envied by many of the other residents. Otherwise it was part of the general uniformity, exactly the same as a thousand other mining company homes, with trams clattering up and down the street outside. Not far away were barracks where African migratory underground workers were housed in conditions that could be euphemistically described as cramped and spartan. Up to 24 men in bunks lived in each barracks room. The Pondo people, who loved to dance, had to develop a special dance ritual that could be accommodated in the cramped space. Add to all this the fact that the temperature often dropped below freezing in the highveld winters, and it can fairly be said that life in this Johannesburg mining community lacked charm. Yet there was, and still is, a great vitality about the place. Johannesburg is Africa's melting pot, the magnet whose gold has over many years attracted people from Britain, Europe, Australia and America (many of them veterans of the early Australian and American gold rushes) as well as from the tribes and clans of Africa; from Zululand, the Transkei and the Ciskei; from Basutoland, Bechuanaland, Swaziland, Nyasaland, the Rhodesias and beyond (to use the colonial names of Ian's boyhood). Johannesburg was the crucible where these different people worked together underground, in conditions of great hardship and danger, communicating in a kind of patois, the Zulu-based pidgin language, Fanagalo. [...]

This is an excerpt from the biography: Into the River of Life. A biography of Ian Player, by Graham Linscott.

Keith Kirsten’s Garden Plants & Flowers is a compact directory of trees, shrubs and flowering plants that are ideal for growing in South African gardens.

Bundu Food for the African Bush

Bundu Food for the African Bush has been made for off-roaders travelling faraway places.