In search of the Pangolin, by Satyajit Das and Jade Novakovic 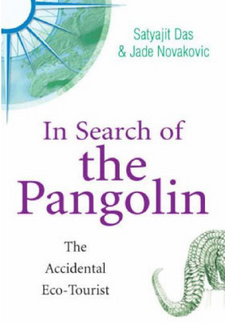 In search of the Pangolin, by Satyajit Das and Jade Novakovic.

In Search of the Pangolin, written by by Satyajit Das and Jade Novakovic, is an unique potted travel narrative focused on serious and absurd sides of eco-tourism.

I know the precise moment when the question occurred to us. It was during breakfast at Ranthambore. Ranthambore is in Rajasthan, south-west of Agra (famous for the Taj Mahal). We were in Nepal and India visiting a number of national parks and wildlife sanctuaries. Some would be more accurately described as wildlife-less sanctuaries. Eco-tourists travel to India to see the royal Bengal tiger, a magnificent member of the cat family. Decimated by hunting and loss of habitat, the tiger survives only in a number of parks, like Ranthambore. Ranthambore is a small park, around 155 square kilometres (60 square miles) in size. A reminder of the great virgin forests that once covered central India, it was once the centre of a Hindu kingdom. The ruins of Ranthambore Fort overlook the park. The fort, with its old defensive walls and other struc-tures, is largely overgrown, and tigers can occasionally be seen in the ruins. In actual fact, Ranthambore is famed for its tigers. It was used in ‘Project Tiger’, started in 1972 by the World Wildlife Fund and the Indian Government to save the animal from extinction. Numerous wildlife documentaries have been filmed at the park, researchers work in and around it, and it is a magnet for foreign tourists and amateur wildlife photographers. We had seen two tigers at Ranthambore. But that was not the subject of our discussion at breakfast. We were staying near the park. Our hotel was once the hunting lodge of the Maharaja of Jaipur. Queen Elizabeth and Prince Philip had been there at a famous hunting party in 1961 - the British Raj and Indian nobility had delighted in the slaughter of tigers as a strange, inexplicable form of entertainment. We took daily drives in jeeps with guides in the park, in the morning and afternoon. After breakfast, at around 6.30-7.00am, we left the lodge to join the queue to enter the park. Being early in the queue was an advantage.

You entered the park while the wildlife was still active and before the animals found a place to settle until the heat of the day had passed. You had the chance to see them before other jeeps scared them away. At breakfast that day, there was a BBC crew: Mike, the genial, bearded producer, along with a cameraman and a sound person. There was Valmik Thapar, famous for his work on a series about Indian wildlife, The Land of the Tiger. The BBC was in India on a 4-6 month project to film a documentary on tigers. The crew spent all day in the park, having a special dispensation to enter the park early, stay all day and leave late. Tourists were only allowed at fixed times in the morning and late afternoon, so we usually saw them at breakfast on their way out. Our breakfast conversation was about the pangolin. Both Jade and I wanted to see one. A pangolin is a scaly anteater that is prehistoric in appearance. Its name comes from the Malay language, and refers to its ability to curl up into a ball. The pangolin feeds on ants, termites and other insects. It is small, about the size of a cat, with a long tail and is covered in large yellowish-brown scales.

The scales are two-sided elevations of skin flattened from the back towards the stomach. It has small eyes with thick lids to protect it from ant and termite bites, and its snout is long, ending in a round disc that is wide at the sides. The pangolin hunts with the aid of its long tongue and sticky mucus produced by its salivary glands. Ants and termites get stuck in the mucus and are eaten. It is mainly nocturnal. All this was, by the way, based on guidebooks and natural-history books. We had never actually seen a pangolin... Why did we want to see a pangolin? The reasons are complicated. By the time of our visit to India, we had been travelling as eco-tourists for about 7-8 years. We had seen many of the ‘hallmark’ species that eco-travellers want to see and photograph.

But never a pangolin. Nor had we ever met anybody who had. On the whole, eco-tourists want to see cuddly or fierce creatures with charisma. In Africa, we were bemused by the frantic desire of tourists to see the ‘Big Five’ - a common term used to denote lions, leopards, elephants, rhinoceroses and cape buffaloes. The tourists’ eagerness to see these species (preferably as quickly as possible) was fascinating. Just as these tourists had lists of what they wanted to see (‘tick-a-box’ travel), we had our list. Our list was made up of obscure creatures, such as the pangolin. In conversations with serious eco-travellers, there is one-upmanship, and you must be able to offer something remarkable. We have seen an aardwolf - a strange cross between a hyena and a jackal that feeds on termites - and a giant eagle owl - a species of large African owl.

These sightings can be offered up and will be accepted as evidence of club membership. A sighting of a pangolin would be special. We also really wanted to see this exotic creature out of a sense of curiosity. ‘Wonder if they have ever seen one?’ Jade mused about the BBC crew. It was early in the morning. Sensible people on holiday would be fast asleep. ‘I mean they must have seen one, don’t you think?’ She was making conversation over the ‘pukka’ English breakfast (cornflakes, eggs, toast, etc.) in the lodge’s dining room.

‘Why don’t you ask them?’ I replied, half asleep.
‘I couldn’t,’ Jade said.
My ears perked up. This was now a contest.
‘Dare you,’ I said.
‘I couldn’t,’ Jade said again. Imminent victory in this dare was making me feel more awake. ‘Why don’t you ask them?’ This was not good. Jade had reversed the dare. ‘Yes, why don’t you?’ She was more strident. ‘You are the one who wants to know.’ This was a clever reversal. We wanted to see a pangolin. Now, I had no choice. I pushed back my chair and walked over to the table where the BBC crew was sitting. They were chatting.

‘Have you ever seen a pangolin?’ I blurted out, aiming for an air of nonchalance and cool. It sounded like a stupid question in school. I would just kill Jade later. Mike looked up, startled. This clearly was not a question he was asked often - at least not recently and not at breakfast. He blinked several times. ‘I haven’t, no,’ he said slowly. ‘But I will ask around.’ ‘Must go,’ he added, standing up. The BBC crew was getting ready to go out. Mike walked off with a cheery wave, though I detected a perplexed look on his face. I wandered back casually to our table and sat down. ‘He hasn’t but he’ll ask around,’ I said. Jade smiled, an ironic look on her face. I didn’t care - I had won the dare.

‘There are pangolins here,’ he began, when I next saw him. ‘Hard to see... nocturnal. David has seen them.’
‘David..?’
‘Attenborough,’ he said.
‘Of course.’ I felt like a right dork.
‘He has seen them in Papua New Guinea. I sent him an e-mail.’

Someone had seen a pangolin. I was excited and full of questions...

‘Sorry, must run, cheers,’ he said and moved off to join the BBC crew at the other end of the veranda. We got to know the crew vaguely after that. We chatted about what they were doing, other documentaries. Chuck was doing brown bears for David in Kamchatka. We had no idea who Chuck was. We left Ranthambore a few days later on the next stage of our travels. Inspiration for eco-travel In the 1980s, Chris, one of the people I worked with, travelled through Africa in the pioneering days of overland travel. He got out slides of his journey along with some souvenirs. I remember him showing us a circumcision tool from the Pygmy tribes. Later, I worked with another man, Peter, who had two photos in his office - a mountain gorilla and a big male elephant with huge tusks. He showed us photos of his African travels. Somehow the photos worked a magic spell on us. […]

This is an excerpt from the book: In search of the Pangolin, by Satyajit Das and Jade Novakovic.

In Search of the Pangolin

In Search of the Pangolin is an unique potted travel narrative focused on serious and absurd sides of eco-tourism.

Do NOT Take This Road to El-Karama. A journey of ups and downs in eight African countries

Do NOT Take This Road to El-Karama is an entertaining account of a road journey from Chris Harvie’s home outside the Kruger National Park to eight African countries.

The Marginal Safari: Scouting the edge of South Africa

The Marginal Safari describes a tour of ten thousand kilometres around the edge of South Africa.