In Search of the African Lion, by Roger de la Harpe and Pat de la Harpe 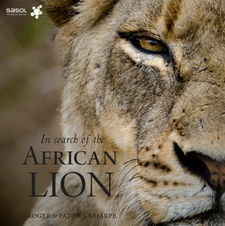 Roger and Pat de la Harpe have documented wild lions of South Africa, and the result, In Search of the African Lion, is a superbly photographed and engagingly written tribute to this often misunderstood predator.

Staring into the face of a lioness considering a charge is not something for the faint-hearted. The ears prick up, the eyes seem to grow into deep round orbs, the tail begins to swish from side to side, and a low and tremulous growl fills the space between you and the threatening cat. To say that she is a splendid sight, and every bit deserving of the title of the king - or, in this case, queen - of the beasts, is an understatement. It is an experience never to be forgotten. My first experience of an angry lioness was in Etosha National Park in 1964. had seen lions before, but few are privileged to get sufficiently close to raise the animals ire and have it express its distrust of you in such a dramatic manner. Since then, it has been a joy to see lions wild in Botswana, and in some of our magnificent protected areas, such as the Kruger National Park, Hluhluwe Imfolozi Park, Pilanesberg Game Reserve and even in Gorongoza National Park in Mozambique, where a large pride of lions took possession of the first hutted camp the Portuguese authorities had built. All of these lions have been wild. Once, in northern Mozambique, while driving to the Tanzanian border, I had the opportunity of seeing, at first hand, the damage that can be inflicted by a wild lion on a human being. I was stopped and asked by a few local Makua tribesmen to take a recently mauled victim to the nearest hospital, about an hour away On the way, I was struck by the fact that the wounded man bore no ill will to the lion, simply accepting his bad luck and also accepting the right of the lion to exist. Sadly I doubt whether one could find too many people these days with such a tolerant attitude. What is even more sad is that the term 'wild lion can be used with less and less conviction these days. Early in the 21st century we are seeing the wild lion under increasing stress, and gradually disappearing from those parts of Africa not formally set aside as protected areas. People should be constantly reminded about the existence and majesty of this truly dominant member of the cat family Its very existence alongside us should be a matter of great pride and respect. This new book by Roger and Pat de la Harpe is a timely reminder of what we might lose if we permit the lion to go the way of the dodo. No better champions of wildlife could be found. Roger is not simply a photographer, and a remarkably good one at that, but he has served with conviction in formal conservation and, if I may say, in an organisation that was fully committed to the task - the Natal Parks Board. It has been a source of real joy seeing one of the staff, with whom I worked, grow in stature from a completely unknown amateur to one of the most famous and talented wildlife photographers in South Africa. During the past two decades, book after book, highlighting the rich wildlife resources of our country, has emanated from Roger and Pat, and in each one can be seen their passion for conservation and the sheer love of wild things that they share, and want to share, with their readers. This book is no exception, and I commend their efforts to keep the necessity for conservation so up-front and obvious, and to ensure that this wonderful cat, the lion, such a symbol of strength and majesty, will continue to survive and receive the respect and affection it deserves. (...)

This is an excerpt from the guide: In Search of the African Lion, by Roger de la Harpe and Pat de la Harpe.

Beer Safari: A journey through the craft breweries of South Africa

Beer Safari takes readers on a journey through the craft breweries of South Africa, stopping to chat to each brewer along the way.