In search of Africa's Great Tuskers, by Johann Marias 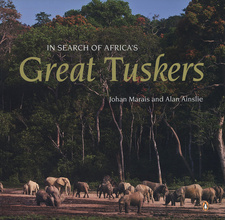 Johann Marias hopes that you will enjoy the journey in search of these magnificent Africa's Great Tuskers. Abundantly illustrated with photographs and drawings, this is a book that will appeal to all who delight in Africa's wild places.

Foreword to In search of Africa's Great Tuskers

Elephants dominate the landscape of the African savannahs in the mind's eye, but in the forests of Central Africa another species of elephant exists hidden by impenetrable vegetation. Two decades ago the lives of these animals started to unveil themselves in naturally occurring forest clearings, providing the first window where they could be observed for sustained periods of time. These clearings had always been known to the local indigenous people, the Bayaka, and provided them with traditional hunting areas and a reprieve from the closed canopy of the forest. Criss-crossed by spring-fed streams, these 'bais' attract animals because of the availability of minerals and the abundance of cotyledons not found in the neighbouring forest. Forest elephants are estimated to comprise one fourth to one third of all elephants in Africa but for many years all that was known about them was conjecture and legend with tales of their aggressive nature and the existence of the 'pygmy' elephant. This information was gleaned from local people and professional ivory hunters whose encounters were fast and fleeting. Now for close to two decades at a place called Dzanga Bai in the Central African Republic we have been monitoring forest elephants and other species of forest mammals, including bongo - the largest species of forest antelope in Africa. The basis of our monitoring is knowledge of the individual identity of the elephants observed in the bai. At the inception of the study we had little idea of the number of elephants in the area but with time it was found that not only were there high densities of elephants, but big-tusked elephants were still in abundance. Since the inception of the Dzanga Study in 1990 there has been a vast change in the human demographics in the area surrounding Dzanga which has led to a change in the structure of the known elephant population as the result of an increase in poaching. After a few years of monitoring known individuals, the largest males showed a remarkable synchrony in coming to the clearing. With the onset of the long dry season in December many of them arrive in musth for their annual visit in search of receptive females. With the change in the human demographics due to an increase in commercial logging and mining in many areas of the Congo Basin, poaching pressure has increased on both forest elephants and other species of forest mammals. Poaching provides not only an economic activity for ivory poachers but also fuels the bush meat market. With the depletion of wildlife in many areas there is more and more pressure being placed on areas where this resource is abundant for export to the growing urban consumer. Today we face an enormous challenge in protecting these last strongholds of the forest elephant and other forest species in places where economic pressure on the natural resource base is opening areas previously untouched by human activities. In the past, with low human densities, these areas were exploited in a sustainable manner. With the increase in extractive industries leading to an influx of people, the establishment of road networks serves not only as a transport system for the export of resources but provides easy access to vast numbers of people seeking economic opportunities. [...]

This is an excerpt from In search of Africa's Great Tuskers, by Johann Marias.