How Young they Died, by Stuart Cloete 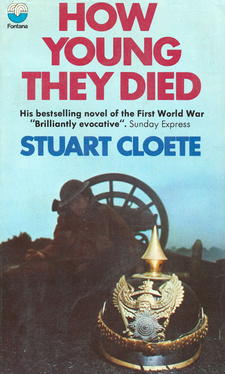 How Young they Died, by Stuart Cloete. Fontana Books.

In his novel How Young they Died Stuart Cloete shows relentlessly the pressures of war upon indiviuals and society as his young hero seeks to fulfil himself in love as well as in battle.

[...] The strong-point, which wasn't so strong after all, had been held. There were no more attacks on the second night. What was left of the battalion was relieved. Jim had succeeded in getting away his wounded. Rations of a sort had come up. Water in five-gallon petrol tins, the battalion mail. He'd sent Sergeant Nolan round with it and he'd brought most of it back. They went into support and over the top again two days later, and lost more men. There was going to be no real rest. Support and attack again. The High Command was trying to gain as much ground as it could before the rains and cold of winter. Then at last they were pulled out, having handed their line over to the Canadians. A long march back to Montauban where the cookers were waiting for them, a hot meal at last. Bread instead of biscuits. The men had hardly finished eating when a runner came from brigade on a motor-cycle with a message for the O C 10th Wilts L.I., Colonel Lynch, who had only been with them a week. He called Jim. 'Hilton,' he said, 'we've got to go back.' - 'Go back, sir?' - 'Yes. The Canadians have lost the trench we took.' - 'My God!' Jim said. 'We're all beat.' - 'We've got to go. Fetch the other company officers. As soon as your men have finished eating, issue ammunition. Two bandoliers, bombs. You know the bloody drill.' Jim called Mulholland, Acting Company Sergeant-Major now, with Hargreaves gone, and gave him the news. 'Fall the men in. SAA, bombs, flares. We're to send up flares when we've got the trench back.' The return march was hell. It had taken them six hours to get out of the line. They had to get back in four in order to attack before dawn. Men slept as they marched, and fell down. A Lewis gunner was drowned in a shell-hole under the weight of his gun. Lost in the mud. They attacked in the grey light of dawn, supported by the Canadians who had reassembled in the support line. The trench was carried, what was left of it after being plastered by both British and German guns. They should have come out now but instead they had to join in the attack that was taking place the next day on the Le Transloi position. Jim had been over the top six times in a month and had not had a scratch. Only a handful of men and N C O's that he'd marched down with were left, and no officers. All strangers, the bloody lot of them. Except for Mulholland, Goodby, Clarke and King. It was too good to last. Each time, each move, with each casualty replacement, a new little society was formed. Faces, voices, joined the group or disappeared from it. They gave each other nothing. [...]

This is an excerpt from the novel: How Young they Died, by Stuart Cloete.

How Young They Died

How Young They Died is an expert blend of grimly harrowing trench warfare and a young man's initiation into the arts of love.

The mask. A savage story from the African past

The mask: A savage story from the African past brings to life the sights and sounds of the South African veld.

The Fiercest Heart is the story of a trekking Boer familiy in the 1830's of South Africa.