The Historical Overberg: Traces of the Past in South Africa's Southernmost Region, by Chris Schoeman 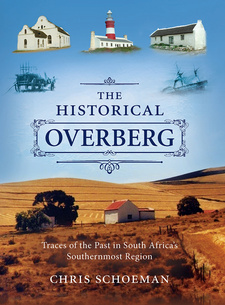 Introduction to The Historical Overberg: Traces of the Past in South Africa's Southernmost Region, by Chris Schoeman: The Dutch named it Over't Berg, 'over the mountain', for its location in relation to Cape Town, beyond the Hottentots Holland Mountains.

Bordered in the west by the Hottentots range, in the north by the Sonderend Mountains, in the east by the Breede River, and in the south by the Atlantic and Indian oceans, which meet at Cape Agulhas, the southernmost tip of the African continent, South Africa's Overberg is one of the most exquisite and diverse regions in the country. Before the advent of well-constructed roads such as Sir Lowry's Pass, Clarence Drive and Tradouw Pass, early European settlers in the Overberg struggled for days to get their ox wagons over the mountainous terrain that encircles the region. Today, travellers enjoy myriad routes that reveal the breath-taking beauty of the Overberg's mountain ranges, wheat and canola fields, vineyards, fruit orchards, fynbos, rugged coastline and sandy beaches. In addition to its natural beauty, the Overberg has a long and rich cultural history, having been home to humans for tens of thousands of years. The geography of certain areas has changed significantly since our early ancestors inhabited the land. For instance, the Klipgat Cave at De Kelders near Gansbaai was about five kilometres inland and not immediately on the oceanfront, as it is now. Between 1969 and 1995 excavators at Klipgat unearthed stone artefacts, preserved bone tools and human remains dating back between 65 000 and 85 000 years to the Middle Stone Age. Prehistoric San rock paintings on Tradouw Pass, in the Stanford area and in the Black Eagle Cave in the De Hoop Nature Reserve near Cape Agulhas demonstrate just how long humans have inhabited the Overberg. There is also evidence of our more recent history, from when the first white settlers arrived at Africa's southernmost point in the seventeenth century. The country's oldest mission station, for example, established in 1738 at Genadendal, still stands, as does South Africa's second oldest lighthouse, which can be found at Cape Agulhas. The treacherous southern Cape coast is littered with the wreckage of ships and tankers - approximately 140 have been mapped - and a number of old towns are filled with a variety of historical monuments and architecture. Swellendam, for example, is South Africa's third oldest district and home to more than fifty national monuments. The Dutch East India Company (VOC) laid much of the infrastructure of European occupation of the Cape within 100 years of the arrival of its colonial administrator, Jan van Riebeeck, at Table Bay in 1652.2 Before this, the indigenous Khoisan people, comprising the nomadic hunter-gathering San and pastoralist Khoikhoi, had been the sole human inhabitants of the region for roughly 2 000 years. Early Khoi herders occupied the Cape's mountains and coast around the Danger Point peninsula and its hinterland, living in caves and protected shelters, and obtaining their food from tidal fish traps (vywers) constructed from packed stones placed along the shore. A well-preserved group of these traps remains at Rasperpunt in the Agulhas National Park, and others can be seen at Kruismansbaai, east of the Danger Point lighthouse, and in the Pearly Beach, Struisbaai and Arniston areas. The Khoi kept domestic sheep and cattle, which they used for food and clothing or as a means of transport. [...]

This is an excerpt from The Historical Overberg: Traces of the Past in South Africa's Southernmost Region, by Chris Schoeman.