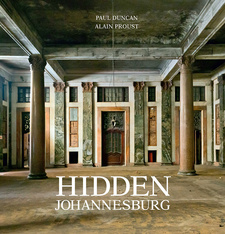 The View could be any of a number of rambling Victorian piles that survive in the suburbs of South Africa's older cities. Typically it has burnt red brick walls and imported wooden fretworked verandah balustrade detail and friezes, deep bay windows, keystones picked out in white, and twin-timbered gables, and there's an ornate roofline. It's actually rather ugly on the outside. It's also a house that sports building materials that were either novel at the time, or of the very best quality or both. But it's not all that remarkable a building - particularly in comparison with its rather grander neighbour, Hazeldene Hall. The View, however, is different from the others. The former home of Sir Thomas Cullman, a bricklayer-turned-prospector and owner of the Premier Diamond Mine, its interiors are, for this country incomparably opulent and have survived, one imagines, partly because Lady Cullinan, who lived in the house until the 1960s, never changed anything. The house has been occupied since 1976 as the headquarters of the Transvaal Scottish Regiment, known familiarly as The Jocks, but the interiors of what is now their clubhouse had become blackened with the smoke of thousands of cigars, and what was once a splendid display of exuberant colour was hidden and forgotten. But they'd survived, and Skye Korck restored them, spending hundreds of hours on a scaffold, like Michelangelo, recolouring and revitalizing friezes, cornices and the ceilings themselves. Brought cleverly back to life, they're significant in that they're the remaining evidence of the once-prestigious backdrop to lives enriched by huge new fortunes in a fledgling city: 'dusty in winter and a quagmire in summer', wrote Flora Shaw in The Times in 1892. The View's interiors, preserved with help from the Lottery Commission, have been restored and are as magnificent now as they must have been when they were first decorated for Lady Cullinan and her husband, the man after whom was named the Cullinan Diamond which came out of the Premier Mine in 1905, Renowned as the largest diamond ever found, Cullinan's gem was presented to King Edward VII and today a portion of it, The Great Star of Africa, forms part of the Sovereign's Sceptre, while the Lesser Star of Africa is in the Imperial State Crown of the British Crown Jewels. These kinds of links are breathtaking, more so because the tangible evidence of their existence is still around for all to examine. The View was built in 1896, designed by Johannesburg's city engineer, Charles Aburrow who, in partnership with Philip Treeby extended it in 1903 to accommodate Thomas and Annie Cullinan's 10 children. Like Hazeldene Hall (also the work of Aburrow & Treeby), The View once had incomparable views over rolling veld north to the Magaliesberg and Pretoria. This was the countryside, and at the time Parktown was chosen for development as a respite from the gritty clamour of the rapidly developing city on the other side of the rocky ridge, replacing dusty Doornfontein as the suburb of the elite. But it wasn't only the distant Magaliesberg that excited its plutocratically prodigal resident Randlords and magnates who, slightly later, went on to employ Herbert Baker, Frank Emley and James Cope Christie to design their stately homes in this dramatic setting. In fact, it looked out over the dense acres of young firs and blue and red gums of the Sachsenwald, planted to supply the mines with props. There was green forest down there where, not long before, it had been only rocky veld and scrubby growth. Who wouldn't want to enjoy the view over what has developed into the largest man-made urban forest in existence?

This is an excerpt from Hidden Johannesburg, by Paul Duncan and Alain Proust.