Heidelbergers of the Boer War, by Ian Uys 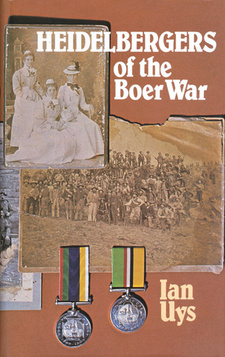 Through the pages of this book the reader will come to know the people as they were — ordinary farmers and townsfolk, who were called on to fight the greatest empire ever known. They rose to the challenge. Many men, women and children were to lay down their lives for their belief in freedom and independence. The author has described the community of Heidelberg at war. His balanced view in presenting the story of all the people of Heidelberg, English as well as Boer, gives the reader a unique and unbiased insight into the effect of the war on a small town. Not only does one learn to know the Heidelbergers' stories before and during the war, but Mr Uys describes what happened to them afterwards. I deem it an honour to have known many of them and I have no hesitation in recommending this book. Up to now very little has been written about the local Boer and English Colonial personalities who were caught up in the war. During his many years of research Mr Uys has interviewed veterans of that war, their descendants and friends, unearthed unpublished diaries and manuscripts and combined his findings in this book. In addition he enlisted in the Heidelberg Commando and served with it as a platoon sergeant in the operational area during 1977. The Heidelberg Commando was part of my command in the period 1944-1948 when I was O.C. Witwatersrand Command and it gave me great satisfaction to be personally and intimately associated with the commando which was my father's. It is gratifying to have at last a regimental history of such a famous Boer unit and to have the stories chronicled of the people who made it so. The Heidelbergers prepared for war. War clouds had been gathering ever since the Jameson Raid of 1896, but now matters were swiftly moving to a head. Cassie O'Reilly was bewildered by the pace. For years Heidelberg had been a sleepy dorp, but now, suddenly it was all a-bustle. For weeks the trains going south had been crowded with women and children. Cassie thought affectionately of her husband. Dr James O'Reilly had often been at the station where the trucks full of women stood in the blazing sun. The kind-hearted practitioner with his goatee beard and steel rimmed spectacles had walked alongside the open trucks handing out bottles of soda-water to the refugees and helping wherever he could. Although he was only five years her senior, Cassie stood in awe of him and always referred to him as 'the doctor'. At 38, Catherine O'Reilly was an attractive woman who was very happy to be in the shadow of her illustrious husband. She had met the doctor when he was in her native Scotland, studying medicine at Edinburgh. Little did she know then, that by marrying him she would be catapulted into the centre of a war against Britain. (...)

This is an excerpt from the book: Heidelbergers of the Boer War, by Ian Uys.

Taken Captive by Birds is a collection of Marguerite Poland’s discovery of birds in young years and the role they have played in her life.