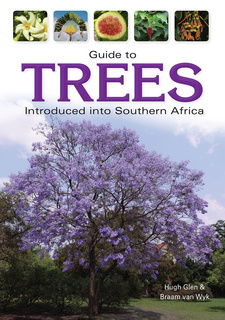 Braam van Wyk and Hugh Glen the Guide to Trees Introduced into Southern Africa with the hope that it would help to open for them a whole new world of hitherto neglected tree diversity present within their midst.

Introduction to Guide to Trees Introduced into Southern Africa

The Royal Horticultural Society journal The Garden reported in a news item in January 2013 that 'Cultivated plants ... including other socio-economically as well as culturally valuable species' have for the first time been deemed important enough to be included in the United Nations' Strategic Plan for Biodiversity 2011-2020. It is therefore fitting that this book about trees cultivated in southern Africa should appear at this time. The reasons for growing trees are much the same here as anywhere else: for timber, paper, food, flavourings, shade, shelter and aesthetics would make a good start to a list. Certainly all of these reasons are to be found in the trees shown here. The question is, why grow alien trees? Some people contend that the safest rule when it comes to planting is 'nothing but indigenous'. But that seems an absurd limitation. Consider just fruit trees: to be sure, there are marulas (Sclerocarya birred) in southern Africa, though it is possible to argue that even they were carried here out of their natural range in prehistoric times. But what if you really need an apple or a peach? They do not grow on marula trees, even for the most dedicated 'only-indigenous' fanatics. And why should residents of cold places be denied summer shade because 'it's not indigenous'? To insist that cool-temperate trees should not be grown under such circumstances seems unnecessarily prescriptive. Guide to Trees Introduced into Southern Africa includes trees that please the palate and the eye, and others that offer protection to scarce indigenous resources by providing a product so similar to the indigenous one as to be indistinguishable, but grown under controlled conditions and ready in half the time. Our indigenous forests have a history of over-exploitation stretching back almost to Van Riebeeck's arrival in 1652, when a 'timber boom' lasting more than 200 years resulted in irreversible damage to this natural resource. Redressing this destruction has driven the import of alien trees for timber, firewood and more. [...]

Invasive in many places and a declared Category 1 b invader in South Africa, Category 3 in urban areas. The timber resembles Indian teak (p.318) but is generally under-appreciated and under-used. Exactly how toxic the fruits are is open to debate but it appears that humans would be poisoned by over-indulgence while birds can eat them with impunity; the leaves are more poisonous. The 'seeds' (stones) were formerly used to make rosaries and other items needing similar beads but have now been replaced by plastic mouldings. Medicinal uses are recorded. [...]

This is an excerpt from: Guide to Trees Introduced into Southern Africa, by Braam van Wyk and Hugh Glen.