Guide to the Namibian Economy 2013/2014, by Robin Sherbourne 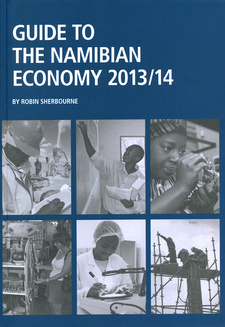 The Guide to the Namibian 2013/14 was written by Robin Sherbourne, a well-known Namibia economist and a former Director of the IPPR. Now in Its third edition, the Guide remains the most detailed and accessible book on the Namibian economy.

This third edition of the Guide to the Namibian Economy is published in the year 2013, three years after the mid-point between Independence in 1990 and the year 2030 when, according to Vision 2030, Namibia should have caught up economically with the developed world. There is no doubt that many successes have been achieved. In broad economic terms, the economy has grown almost every year since 1990, perhaps by an average of 3.6 percent a year. With the population growing by 2.6 percent a year, the average Namibian has become better off. One percent a year compounded over 20 years represents a significant improvement in average living standards. Other official statistics documented in later chapters appear to bear this out. However one juggles the figures (and the IPPR has been in the forefront of scrutinising the data that exists), it does look as if poverty and extreme poverty have declined - even though inequality may not have changed as much as first believed. Furthermore, poverty has declined during a period when the young nation was dealt a severe early test in the form of HIV/AIDS, the impact of which has been painful and protracted and has been mainly responsible for the reduction in life expectancy since 1990. [...] And yet, for those who believe in the power of economic policy and the importance of institutions, it is hard to pretend that all is well. Because the hallmark of effective institutions is that they produce effective policies across the full range of critical policy areas (even politically difficult ones), that they do this in a reasonable space of time, and that they are able to modify (or ditch altogether) policies that are clearly not working. Any objective analysis cannot avoid coming to the conclusion that there are major concerns on all three fronts. The first concern is that some of the most critical areas of policy remain a policy-free vacuum. After 23 years, Namibia still lacks an overarching Black Economic Empowerment policy and legal framework. For all the talk of economic transformation. Namibia still lacks a clear industrial strategy showing how this is to be achieved. The second concern is that policies take far too long to be designed and implemented. New telecommunications legislation was envisaged way back in 1999 but it took a further ten years until a new Communications Act was finally passed. Cabinet decided on changing domestic asset requirements in 2004 but nine years later a satisfactory legal framework is notable by its absence. Mining taxation was a thorny issue badly tackled in 2004 which required a further five years until legal uncertainty was eliminated by a change in the law. The industry is still awaiting a completely revised Minerals Act which has been in the pipeline for at least five years. Namibia passed competition legislation in 2003 but the Competition Commission only came into existence in 2009. The third concern is that Namibian policy-makers have found it difficult if not impossible to alter policies that are clearly failing to deliver. There is no sign that existing commercial land reform policies are delivering anything other than creating more rural poverty, albeit at immense cost. There is no sign that existing labour policies are helping to generate sustainable and formal employment. If anything the hurdle between informal and formal sectors is being increased. Thereis little sign that state-owned enterprises are helping to generate new jobs and incomes. [...]

This is an excerpt from the book: Guide to the Namibian Economy 2013/2014, by Robin Sherbourne.

Guide to the Namibian Economy 2013/2014 serves as an invaluable source of information and insights.

Guide to the Namibian Economy 2010

There is unlikely to be another guide to the Namibian economy actual as 2010 that is as detailed and accessible.

Guide to the Namibian Economy 2009

This Guide to the Namibian Economy 2009 is the culmination of at least ten years of work.

Explanation and prediction about Namibia current and future trade patterns