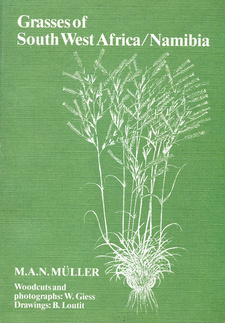 115 species of grass were selected, and these are described. The majority of these grasses are important agriculturally, whether as pioneers, sub-climax or climax grasses. Pioneer grasses are usually annuals which have the ability to establish themselves in unfavourable conditions on bare or overgrazed land, and in doing so to make the environment more conducive to the subsequent establishment of perennial grasses. As the veld recovers it progresses through several stages of stabilisation in which the sub-climax grasses play a role, until a stage is reached when climax grasses begin to appear. This climax stage is the ideal condition and the one towards which management should always be directed. The synopsis of the vegetation types of the territory is intended to provide the reader with some idea of the correlation between the distribution of grasses and the various vegetation zones. A knowledge of the vegetation types of South West Africa/Namibia helps to clarify why certain grasses should not occur in certain areas. Two keys for the identification of the different grass genera, one simple and one more advanced, have been provided. In the simple key, use has been made of characteristics which can be distinguished with the naked eye. Unfortunately cases do occur where it is impossible to distinguish between genera without the aid of a magnifying glass. A lens magnifying at least 10x is required for the advanced key. The genera and species which are dealt with in this publication are arranged in alphabetical order. Each species is described as follows: The origin of the scientific name is given, wherever possible. The common names, when known, are listed in the following order: English, Afrikaans and German. The classification of inflorescence-type, i.e. spike, panicle or raceme, into which it falls, is indicated. A detailed description of the plant follows. The distribution of the species in the various districts is indicated with the aid of abbreviations. Lastly, general information about the species is provided. Every description is further clarified by a clear illustration, a photograph (where available) and a distribution map giving the localities where the species' occurrence has been recorded. The woodcuts which have been used were originally made by Willy Giess, former curator of the S.W.A. Herbarium, while he was in the internment camp at Andalusia (currently Jan Kempdorp, R.S.A.) These woodcuts have already been used in a publication "Bestimmungsschlüssel für südwestafrikanische Grasgattungen" by Otto Heinrich Volk (1944), which is now Africana. The author is greatly indebted to the artist, Blythe Loutit (nee Pascoe) for the illustrations, with which she took meticulous care to achieve botanical accuracy. All colleagues whose contributions helped to make this publication possible are greatfully thanked. In closing a particular word of thanks to Mr. Willy Giess who was prepared to share his knowledge with others, offered constructive criticism, and above all gave moral support while this publication was in preparation.

This is an excerpt from Grasses of South West Africa / Namibia, by M.A.N. Müller.

This rare first edition of Grasses of South West Africa / Namibia was first published in 1984.