Grasses of Namibia, by M. A. N. Müller 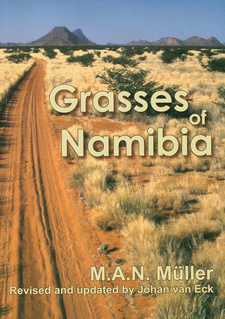 The aim of Grasses of Namibia, by M. A. N. Müller, is to provide much-needed information on the grazeable vegetation of Namibia. Some 115 species were originally selected, supplemented by a further 30 in this revised version, and described.

The majority of these grasses are important agriculturally, whether as pioneers, subclimax or climax grasses. Pioneer grasses are usually annuals that have the ability to establish themselves in unfavourable conditions on bare or over-grazed land, and in doing so to make the environment more conducive to the subsequent establishment of perennial grasses. As the veld recovers it progresses through several stages of stabilisation in which the subclimax grasses play a role, until a stage is reached when climax grasses begin to appear. This climax stage is the ideal condition and the one towards which management should always be directed. A real attempt has been made to ensure that this publication is both practical and appealing, while still aiming to educate and inform. An updated and improved key for the identification of those grass genera included in this book has been provided. This simple key is based on characteristics that can be distinguished with the naked eye, thus facilitating identification in the field. A glossary of technical terms and an explanatory illustration have been included to enhance user understanding. The grasses that are dealt with in this publication are arranged in five basic groups according to inflorescence type. Within each group, the species are arranged in alphabetical order. Each species is treated as follows: The currently accepted scientific name, without author citation, is clearly presented; the common names, when known, are listed in the order: English, followed by other languages listed alphabetically; the origin of the scientific name is given, wherever possible; the grouping into inflorescence type is indicated; a detailed description of the plant follows and general information about the species is given; every description is further enhanced by a clear line drawing and a distribution map illustrating recorded localities; and icons depicting characteristic features are provided, as appropriate. For those readers requiring a comprehensive checklist of all grass taxa occurring in Namibia, Klaassen & Craven (2003) and Fish (2003) may be consulted. The preliminary vegetation map and descriptions, as appearing in the earlier version of this book, was a synopsis of Willy Giess (1971). Intensive research work is currently being undertaken to more accurately delimit and describe vegetation types for Namibia.

During the early 1980s, a book was produced by the late Dr. Mike Müller from the then SWA Herbarium that was to have a significant impact on the agricultural sector in Namibia. This publication "Grasses of South West Africa/Namibia", then available in three languages, was instrumental in improving agricultural practitioner knowledge on the predominant grass species occurring in the country and their ecological and economical value. Not only was this a well-thumbed handbook in extentionists' offices and farmers' book-shelves, but was a prescribed textbook for agricultural students, even long after it was no longer available in print. In Namibia, where agricultural production is based largely on extensive rangeland farming, good pasture management practices through a thorough understanding of key grass species are fundamental to success in this sector. About 390 grass species are indigenous to Namibia, representing almost 10% of the total flora of the country. In addition to the vital role they play in providing grazing to livestock and game species, some grasses are used for thatching and construction, while others provide grains for human consumption. [...]

This is an excerpt from Grasses of Namibia, by M. A. N. Müller.

This rare first edition of Grasses of South West Africa / Namibia was first published in 1984.