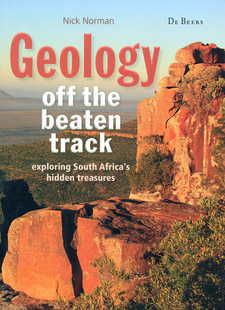 Nick Norman's "Geology off the beaten track. Exploring South Africa's hidden treasures" is a companion on your planned routes and will take you to places of unimagined interest, and develop an understanding of how planet Earth has changed over the aeons and evolved into the landscapes of today.

This book is a companion to Geological Journeys: A traveller's guide to South Africa's rocks and landforms, which discusses geological features along all the major routes across South Africa. In this later guide you leave the well-beaten track, with its traffic and familiarity, and take the road less travelled. You'll see fewer cars; you'll be freer to slow to a crawl, to pull off the road and stop and look. Whether or not you see new parts of the country, unexpected birds and animals or unfamiliar veld types, one thing is certain, that you'll see and get to understand geology you had never even noticed before. The study of geology requires enormous elasticity of imagination. First, there is the stretch required to think in terms of millions, even billions, of years. And second, we need to regard the Earth's coastlines and landforms as they exist today as being relatively new, and constantly changing as a result of the composition of the Earth.

This drive incorporates four key wine-route destinations: Durbanville, Paarl, Franschhoek and Stellenbosch. Easily accessible from Cape Town and ranking high on the list of South African tourist destinations, the Cape wine route is full of geological interest. All three basic categories of rock type, namely igneous, metamorphic and sedimentary, are well exposed, and the scenery is spectacular. Although you're in the Cape Fold Belt, with its high mountain ranges and wonderful geological exposure, you won't see much folding. That's because we're in the Syntaxis Zone, where the north-south ranges and fold systems to the north of Cape Town give way to the east-west elongation, which stretches eastward from here to beyond Port Elizabeth. In this region, comprising a tectonic domain of its own, instead of folds you'll see lots of very broken rock and some good faults. Even though you're in the winelands we're going to touch only briefly on the subject of terroir and the extent to which geology might influence the style of wine. Feel free, though, to play the game based on what you read in these pages and the wine you taste!

Geology of the route: Cape Town to Durbanville

Leave the northern suburbs of Cape Town on the M13, which is not difficult to find. Ahead of you and to your right is the whaleback of Tygerberg, part of a group of hills called, informally, Durbanville Hills. The western and southern slopes of the hills are close enough to the west coast to enjoy cool onshore winds throughout the year. Together with the Mediterranean climate of the area, with its winter rainfall and dry summers, these slopes have the capacity to produce high-quality wine. You may wonder about the gently rolling hills, quite unusual in this region of rugged, craggy mountains that rise straight out of the low-lying plains. The answer lies in the geology, and it applies to other areas of low relief in the winelands closest to Cape Town. These hills are all formed by sediments of the Malmesbury Group; they comprise mainly greywacke and phyllite, rocks made of clay minerals that easily erode (unlike the hard quartz of the range-forming Table Mountain Group). Another thing you'll notice about these hills is their contrast with the bare granite slopes of Paarl Mountain. (...)

This is an excerpt from the book: Geology off the beaten track. Exploring South Africa's hidden treasures, by Nick Norman.

Geology off the beaten track introduces geological sites and treasures beyond the major routes across South Africa.

Kept simple and well illustrated, Box of rocks: Beginner's guide to South African Geology, is desinged for the young Geologist and rock collector.

Geological Journeys: a traveller’s guide to South Africa’s rocks and landforms is an essential companion for car journeys.

Namibia: Fascination of Geology is essentially aimed at the geologically interested layman and hobby geologist without a scientific background.