Game Ranger in Your Backpack: All-in-one interpretative guide to the Lowveld, by Megan Emmett and Sean Pattrick 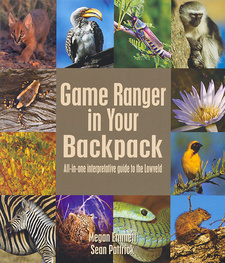 Game Ranger in Your Backpack: All-in-one interpretative guide to the Lowveld, by Megan Emmett and Sean Pattrick. Briza Publications

Game Ranger in your Backpack is a compact companion that not only offers interesting information on wildlife topics including mammals, birds, reptiles and amphibians, invertebrates, trees, grasses, flowers and tracks but it is also visually interpretative, offering hundreds of images to assist with the deciphering of animal behaviour or the recognition of common species. This all-in-one interpretative guide to the Lowveld has been written by Megan Emmett and Sean Pattrick.

Formation of the Lowveld

If the Lowveld is examined in cross section its geological composition becomes evident. The western limit of the Lowveld is demarcated by the Drakensberg Mountains or Escarpment. These are granite-based and preside over the valley that stretches eastwards toward the ocean. The eastern hem of the Lowveld is marked by the rhyolitic Lebombo Mountains. Between these two ranges from west to east lie plains of gabbro derived soils, the red sands of ecca shales and basaltic clays. These were laid down one upon the other over millennia and exposed when Gondwanaland broke up and tilted the continent eastwards towards the sea. Granite covered the Lowveld region first, 3 500 million years ago. Over time, some parts of the granite layer were metamorphosed by heat and pressure to produce gneiss and scattered intrusions of gabbro (an intrusive igneous rock) ap-peqred amongst this granite-gneiss base layer. Three hundred million years ago a layer of sedimentary rock was laid atop the granite-gneiss layer. These ecca shales developed due to a particularly wet climate at the time. Then as the mega-continent of Gondwanaland first began creaking 200 million years ago, a great deal of volcanic activity began spewing firstly layers of basalt onto the surface of the earth and then layers of rhyolite (both extrusive igneous rocks). Finally Gondwanaland broke apart (about 135 million years ago) and the whole section of continent that now comprises the Lowveld tilted so that the flat layers of superimposed rock types were exposed in cross section. The different properties of the assorted exposed rock types determined the rate at which they weathered and the nature of the resultant soils and andscape. Granite and gneiss, being hard and weathering-resistant, resulted in the towering Escarpment. The rhyolite of the Lebombos is also resistant to weathering but less so than granite. In between, the gabbro, ecca shales and basalt weathered into flat plains. The gabbro produced thick block-cotton soils which become waterlogged and sticky when wet but which supports nutritious veld, including morulas, knobthorns and palatable grasses. The ecca shales weathered into red iron-rich soils and the basalt produced fertile clay soils. The combination of geological events, their resultant soils and the climate of the Lowveld has resulted in a diversity of landscapes and hence habitats which support a myriad plant life and animal life. [...]

This is an excerpt from the guide: Game Ranger in Your Backpack: All-in-one interpretative guide to the Lowveld, by Megan Emmett and Sean Pattrick.

Game Ranger in Your Backpack: All-in-one interpretative guide to the Lowveld

Game Ranger in Your Backpack is intended to substitute the presence of a personal guide during visits to the Lowveld region of South Africa.

Nature Unpacked is the ultimate travelling companion for those visiting the southern African bush.

The Campsite Companion makes the idea of camping, adapted to South African conditions, accessible and fun.

Seventeen of South Africa's most prominent bush experts share their knowledge about ecology and management of the Bushveld.