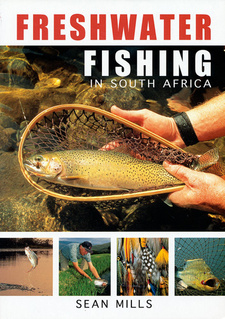 About: Freshwater Fishing in South Africa. Tench, by Sean Mills

Written primarily for the novice fisherman, the book reveals the secrets of successful river, dam and estuarine angling, offering sound advice on the purchase and assembly of tackle, choosing and collecting bait, buying and preparing lures, and reading water and climate conditions. It also describes and illustrates 30 freshwater and estuarine fish species and explains how to catch each one. Another section, comprising map, explanatory text, and photographs, covers the various regions of South Africa and their fishing potential. With this book in hand, even the most inexperienced angler can venture forth with confidence.

Tackle: Because of the small average size of tench, light tackle is required in order to catch them; heavy tackle will only make this species suspicious. The best methods normally use a float of one type or another, so long rods of up to 12 ft (3,7 m) with a light tip may be required. For normal bottom fishing, a 9-10 ft (2,73 m) rod with a light to medium-light action is quite adequate. A fixed-spool reel with a sensitive drag is recommended. A spin-cast reel or centrepin can also be used. Line strength should be 2-3 kg, but in very weedy areas, heavier tackle may be required.

Bait: The best baits include whole-kernel sweetcorn, bread paste, egg-and-flour-based coughs, earthworms, garden snails, maggots, tinned meats. butter beans and boilies for larger specimens. (The processed baits may be flavoured). Algae may also be tried on the hook. Hernpseed oil is particularly effective. Tench may occasionally take flying ants off the surface of the water but don't usually feed off the top.

Techniques: Because of the shy feeding habits of tench, specialized techniques have had to be devised in order to catch them. One way to attract them into your fishing area is to use a rake attached to a long rope to churn up the bottom. If there are any fish in the area, they will come and start feeding on the bloodworms and nymphs that this raking releases. They can also respond well to small applications of loose feed such as a few grains of sweetcorn or chopped-up worm. Sensitive float-fishing methods normally work best in still waters. Tench stand on their heads to feed in the mud and then right themselves afterwards. When they feed like this, they rarely move off, preferring to chew the food on the spot. Because of this, a ledgered bait using a bite indicator may only register a minute twitch and if the angler does not know what to look for, the bite will be missed. This is where the lift method of float fishing (see page 69) comes into its own. (...)

This is an excerpt from the book: Freshwater Fishing in South Africa, by Sean Mills.

Freshwater Fishing in South Africa is a practical guide for anglers in general, but serves also as a start-up manual.

A Complete Guide to the Freshwater Fishes of Southern Africa

A Complete Guide to the Freshwater Fishes of Southern Africa is an in-depth introduction to the natural history of freshwater fishes in the region.

A guide to freshwater and saltwater fly-fishing in Africa