For Valour. The History of Southern Africa's Victoria Cross Heroes, by Ian Uys. 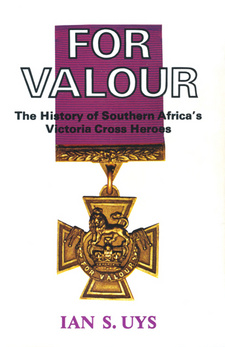 After 15 years of research Ian Uys has collected the biographic details of all the Southern African Victoria Cross heroes in his book For Valour.

The study of decorations and medals is a most fascinating one. However, the mention of either the word "decoration" or "medal" in the title of a book suggests to the average reader a subject as dry as dust and of interest only to the specialist. Such an assumption is not only erroneous but regrettable, because it closes the door to a world where, for a short time in the lives of ordinary men and women, the qualities of courage, loyalty and devotion to duty rise above all personal considerations and, although the bare statistical facts may convey little, the human experiences will appeal to the imagination of most readers. The late Major Lawrence L. Gordon, a world authority on the subject, sums it up, "To me at any rate, the bare facts concerning the details of the piece are the least interesting. It is the knowing of the details concerning each award where the real interest lies." I would like to take this a step further by adding that the details concerning an award of a decoration or medal form an historical link between the past and the present, for a medal or decoration can tell us a great deal if we care to delve into the details and complete the story. And who can deny that history is an interesting subject, particularly if it concerns deeds of chivalry and acts of valour such as those which have earned for a select few the award of the most coveted and highly thought of decoration in the world - the Victoria Cross. Here at long last is a book that tells of the deeds which earned South Africans or members of South African units, Britain's highest military decoration. Each award is dealt with separately. Not only are we told of the specific deed itself, but the writer gives us a brief account of the campaign and particular action to which it relates. A biographical background and an account of each recipient's subsequent career add the necessary personal touch. Each is a complete story of such self-sacrifice and outstanding bravery as will make readers proud to be associated in some small way with the individual whose unselfishness and extreme courage have earned not only for himself, but also for his Regiment and South Africa, the undying admiration of all who read the story. It is a book which should be read by all school children for it will tell them something of the bitter fight by their forebears to gain and maintain a foothold in this most southerly part of the African Continent and it will give them inspiration for the future. Mr. Uys has done a great deal of research to produce this book. Much, however, remains to be done in this interesting field of study and it is my sincere hope that he will capture the interest not only of those already working in this field but also many thousands more whose combined efforts and interest may bring to light many of the snippets of information still lacking which will help us to learn more about the personal everyday lives of these men. I deeply appreciate the honour of subscribing a foreword to this interesting narrative of courage and spiritual grandeur which is so often taken for granted in times of war but which is so lacking in times of peace.

This is an excerpt from the book: For Valour. The History of Southern Africa's Victoria Cross Heroes, by Ian Uys.