Folktales from Africa, by Dianne Stewart 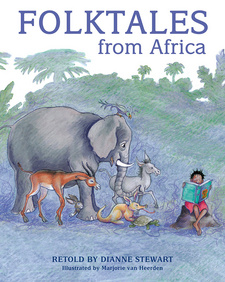 Before folktales were recorded in books they were told in order to survive in the memories of people. The storyteller, often a grandmother, chose a story from a bank of traditional tales, adjusting it according to her personality and the needs of the audience. Their participation made storytelling a communal activity. Although timeless, folktales are a product of the social, cultural and political environment in which they are told. In Folktales from Africa Dianne Stewart has shown their contemporary relevance through a Fact File that appears at the end of most folktales.

The Pig and the Disrespectful Man

'Kwasukesukela...' (Once upon a time...) The storyteller's words took wings and excitement grew in the young audience who were seated around her. 'Cost, cos/,' they replied. (Little by little.) With the full moon behind her, the old woman began her story ... On the north side of the Tugela River, which flows from the mighty mountains into the sea, lived a handsome young man who had a beautiful girlfriend. Both boys and girls in the area were in awe of her beauty that shone from within. Just before dusk one day, as the setting sun cast its last light on the gently flowing landscape, the young man was walking beside the river when he saw a pig dragging itself up the river bank. It struggled to climb the slippery slope with its short legs, but when it was free, it ran towards the young man. He was so disgusted by the sight of the pig, which dropped a smelly trail of mud behind it, that he spat on the earth in front of the pig. This offended and angered the sludge-stained pig so much that rage rose in the animal. Then it said: 'Young man, one day when a person spits at you, see how you feel!' The handsome boy looked at the pig standing in front of him and, instead of feeling guilty about what he had done, he laughed out loud, mocking the pig. The pig looked dejected and was saddened by the attitude of the young man who came from a respectable home. Food was always freely available in his household and he lacked nothing. In fact, he thought so highly of himself that that he didn't believe the pig's words. He even doubted whether anyone would ever lift an eyebrow to him, let alone spit at him! As he turned to walk away from the pig, the young man saw people walking among the shadows not far from him. They had just finished harvesting their crops in the fields and near him was a sack of corn. As he looked at it, his eyes were drawn to a brown rat, the colour of earth. He noticed its whiskers twitching as it tried to make a hole in the sack. Impulsively the young man kicked the rat and when it landed some distance away, it was dazed. When the poor rat came to its senses, it cried out: 'Young man, you have not lived long. One day you'll be starving like me and people will kick you away from the food you are eating, just like you did to me! You'll see what it is like!' As the young man stared at the rat, a smile appeared on his face and he looked scornfully at the tiny animal. 'Pride comes before a fall!' said the rat as it scuttled into the long grass. But the young man just laughed at the rat, not paying attention to its words. When the following spring turned to summer, the young man was invited by a mediator to accompany him to his girlfriend's house. As they travelled over the hills, the mediator said to the young man: 'Listen to me, now. Do not make a pig of yourself at your future in-laws' house. You must never be greedy and overeat at their home. Do not take advantage of their hospitality.'  [...]

This is an excerpt from Folktales from Africa, by Dianne Stewart.

Folktales from Africa consits of 20 stories from the length and breadth of the African continent.